Distract is a mechanic that should have been in the game since its start, so a Hero that focuses on it should come as the role model for a Tank! Feel free to leave any feedback and correct any mistakes! 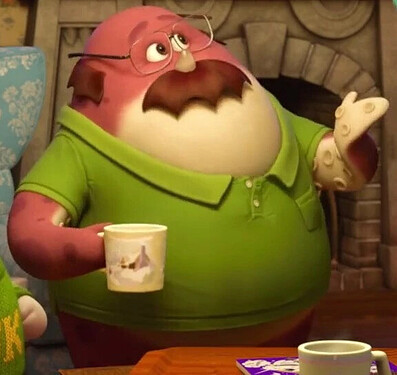 Don Carlton is a 3 Stars Frontline Tank Hero, whose Trial Team is Yellow.

Being both a master of Sales and Scaring, it’s only natural that Don Carlton would ace the art of distracting creeps to give them the greatest Scare of their lives! Be aware around him, 'cause his unassuming appearence conceals a true menace to your lines!

“Thanks for taking it easy on ol’ grandpa.”

Mastery Collections: Tank
Entrance: Don walks into position and adjusts his shirt.
Victory: Waves while his card is stuck on his tentacle.
Defeat: Looks around and shrugs.
Basic Attack: Slaps nearby enemies.

Here’s my card!
Don Carlton offers his business card to the enemies, distracting all of them for 8 seconds. Don Carlton gains X Reality per enemy Distracted by this skill. “Distracted” applied by this skill cannot be blocked by Hardy or cleansed. If this skill Distracts an already Distracted enemy, that enemy receives 2 Stacks of “Discount”

A Mature Scare Student
Don Carlton and his allies receive 50% less damage from Scared enemies. Enemies that receive a Crit or Super Crit while Distracted are Scared for 5 seconds.
The Scare might fail against enemies above level Z.

Extra Income
Don Carlton receives 1 Stack of Hardy whenever Distract or Discount is applied to an enemy.
Don Carlton and his allies receive a 50 Tenacity Buff that can Stack up to 3 times whenever they Scare an enemy.
Enemies that are Distracted while Scared receive 2 Stacks of Discount.
The applying of Hardy might fail if Don Carlton is above level Z

Is Charged In Battle When: Enemies are Distracted 3 times.

Don Carlton + Scrooge McDuck
Campaign: The Persuasion of a Businessman: Don Carlton tries to convince Scrooge to donate to the Oozma Kappa Foundation, but he doesn’t want to waste a single dime even with the possibilty of it generating more money to him in the future.
Allies: Mike Wazowski, Russell & Kevin, Donald Duck.
Disk Name: 1 Dime Monthly Subscription
Level Effect: +F Max HP to Don Carlton and his allies; +F Skill Power to all allies.
Star Effect: The limit of Stacks of Discount per enemy is now 8. Experienced Businessman now grants 10%(+10% Per Star) Damage Negation to Don Carlton and his allies for 10 seconds. This Buff cannot Stack.

Don Carlton + Tamatoa
Campaign: The Value of The Lair: Carlton manages to convince Tamatoa not to eat him by promising to keep the Market Value of his land high enough that nobody would want to buy. Now, Tamatoa demands him to pass there every day to report the variation in its price, and Carlton is relieved that he has no idea as to how the market works.
Allies: Maui; King Louie; Hades
Disk Name: Fake Market Report
Level Effect: +F Max HP; +F Armor
Star Effect: Enemies that are Scared or Distracted are also Blinded for 3(+1 per star) seconds. Suction Cup Danger now also grants Armor and Reality to Don Carlton per Blinded enemy, and its buff is boosted by 10%(+10% per Star).

… All good concepts on the forums are pretty lengthy. That was not worth reviving this topic.