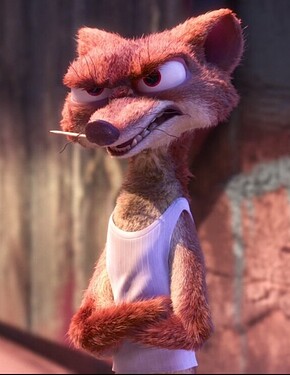 This sly con artist scurries past anyone trying to take him down. With his criminal mindset and slick getaway maneuvers, enemies will find him hard to contain.
Trial Team: Yellow
Role: Backline Tank
Stars:

Quote: “It’s Weaselton, Duke Weaselton, and I ain’t talkin’, rabbit, and there’s nothin’ you can do to make me.”

Animations:
Entrance: Duke rushes into the battlefield with a duffel bag.
Victory: Duke laughs cockily.
KO: Duke holds the duffel bag away from the enemy.

White Skill - Have a Donut - Fantastic Damage
The Rodentia donut shop’s donut appears before Duke, who then kicks it at the strongest enemy, dealing X damage and stunning them for 7 seconds.

Green Skill - Night Night
Duke grabs a night howler bulb from the duffel bag and throws it at the enemy lineup. The bulb puts off potent fumes, dealing X damage and removing X reality from enemies over an 8-second time block.

Blue Skill - Counterfeit
Duke throws DVDs at the three enemies with the most tenacity, applying Counterfeit to each one hit for 9 seconds.

Counterfeit causes enemies to deal damage and apply debuffs to either themselves or their allies.

Purple Skill - the Duke of Bootleg
Duke and his allies take 60% less damage from enemies with Counterfeit. His max HP and energy gain are increased to X.

Friendships:
Duke Weaselton + Judy Hopps
Campaign: Weaselly Convinced - Judy is struggling to track down a cyber-criminal, so she asks Duke Weaselton to help look for them in exchange for having his entire criminal record wiped. Duke reluctantly agrees, and the two follow the crook’s digital footprints.
Disk: City of Second Chances
Disk Memory: Duke cannot have energy stolen from him while a bulb is infield after performing his “Night Night” skill.
Disk Power: Z reality
Allies: Simba & Nala, Kronk, Li Shang

Duke Weaselton + Maui
Campaign: Duke Dynasty - Maui befriends Duke after stopping a group of creeps from stealing the contents of his duffel bag. Duke is wowed by the demigod’s hook, and wants to use it for himself, but to do that, he’s gotta be one step ahead of him.
Disk: Totally Ungrateful
Disk Memory: Each time Duke performs his “Counterfeit” skill, enemies have X HP stolen from them and given to the ally with the least HP.
Disk Power: Z Basic Skill power
Allies: Yzma, Shego, Jack Skellington