This is my likely submission for @Imagineer_V’s contest 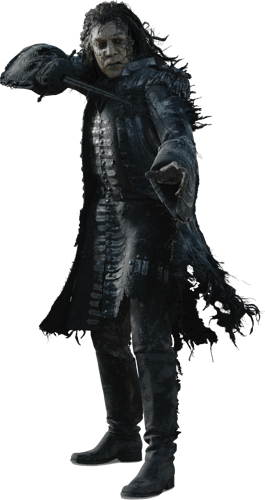 “The pirates have infected the seas for generations. That’s why I’m here to eliminate them all…”

The fierce killer of pirates, Captain Salazar personally tries to eradicate those who oppose him

Defeat: Steps back and looks frightened

Passive: The enemy with the highest Skill Power is marked with “Pirate” at the start of each wave.

Active: Captain Salazar taps his sword on the ground until he runs out of energy, dealing X Damage to a random enemy with each tap. If Captain Salazar targets the enemy marked with “Pirate”, they are instead dealt X True Damage or instantly KO’d if they are below 30% Max HP

Captain Salazar calls for one of his ghost sharks to bite a random enemy, dealing X Damage to them and applying them with 3 stacks of Fatigue

When a projectile would hit Captain Salazar, he instead absorbs it, healing himself for X HP plus HP equal to 10% of the damage he would have taken.

Captain Salazar can absorb an attack once every 9 seconds.

Each time an enemy is dealt True Damage, they receive 2 stacks of Fatigue.

Captain Salazar heals for X HP each time a stack of Fatigue is removed by an enemy.

Captain Salazar is immune to debuffs and disables while using “Killer Of Pirates” and gains 50 energy each time he would be disabled or debuffed.

Whenever the enemy marked with “Pirate” is KO’d, Captain Salazar and allies gain a shield with X HP

Captain Salazar and Hector Barbossa
Campaign: Sparrow Hunt
Disk: Captain’s Orders - Each time a stack of fatigue is removed on the enemy with “Pirate”, nearby enemies receive 2 stacks of Fatigue and have their Reality reduced by X plus Y Reality per star.
+X Armor
Description: Barbossa and Salazar search for a missing Sparrow
Allies: Basil of Baker Street, Dash, Kida

Good concept, just one question: Why this in spanish?

It´s a reference to the movie or something?

Yep, it’s his nickname amongst the pirates