File your paperwork...or else (likely concept) 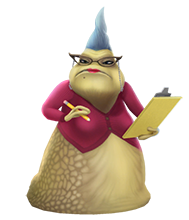 Entrance: roz slithers into the battlefield

Victory: roz laughs to herself

Each CDA agent has X HP and instead of a basic attack they instead scan any enemy in front of them which studies the enemy for 10 seconds.

The study may fail when enemy is above LV Z

Roz also prefers to attack the enemy with “Always watching” and her basic attack deals X more damage to that enemy.

When under 40% of her health, Roz closes the enemies off from her with retractable shutters. This gives Roz and allies in front of her a shield of X amount for 15 seconds.

Roz and her allies are immune to critical damage while shielded.

All studies inflicted by allies to enemies are now unavoidable.

Each summoned CDA agent now gains a 100% speed boost for the first 5.5 seconds that they are summoned.

Each shield on an ally gives them 4 stacks of hardy.

Roz/Quorra
Master of the keys
fatigue when threatened

Whenever Roz goes under 40% of her max health, she inflicts 2 stacks of fatigue to the enemy who damaged roz