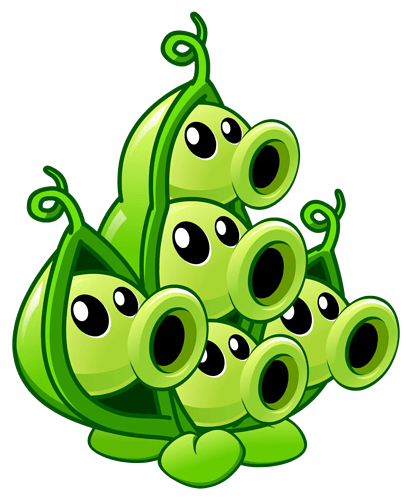 “Its definitely better to be together!”

Entrance: a seed packet gets planted into the position which then the pea pod pops out of the ground with only one pea in the pod

Victory: the peas in the pod cheers as they rock the pod back and fourth

Defeat: the peas spill out of the pod as they splat on the ground

Basic attack: one of the pea’s spits a pea at the nearest enemy, dealing x damage

Passive: Pea pod starts out the battle with only one head which spits out a pea that deals x damage. However, pea pod grows another head every 7 seconds which also shoots a pea which deals another x damage. Pea pod can only 5 heads in battle.

When under 40% of their max health, a mine cart from the wild west appears as they appear inside the mine cart, the mine cart protects pea pod from damage for 10 seconds and also let’s pea pod grow his heads quicker.

“Cart protection” now gives pea pod a shield for x amount when the mine cart dissapears which is immune to damage from projectiles and also increases the damage of their basic attack by x amount when the shield is destroyed.

All debuffs given to pea pod are now 20% less powerful for how many heads the pea pod gains throughout the wave.

Pea pod now increases their max health for every head they gain throughout the wave.

“Fireball peas” now decreases armor and
attack power from each enemy that the fireballs hit.