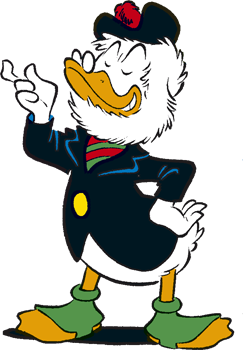 Basic attack: Glomgold hits enemies with his bag of money.

The player chooses one of the three of Glomgold’s schemes to unleash into action. On auto, Glomgold summons shark, then calls Beagle Boys, and lastly Frames enemy, rotating in cycle.

Shark: Glomgold summons a shark which attacks the nearest enemies, dealing X Fantastic Damage, applying 5 stacks of Weakness for 11 seconds, stunning them for 8 seconds, and stealing 35% of their Max HP for 10 seconds.

Beagle Boys: Glomgold calls in Beagle Boys to charge into the enemies, dealing X Normal Damage to all enemies, knocking them back, and removing 3 buffs from each enemy.

Framed: Glomgold frames a random enemy into a crime, removing all of their buffs and causing police car to chase after them, the enemy will leave the battlefield with the police car for 10 seconds and will return with 6 stacks of Fatigue. For every second outside of the battlefield the enemy loses X HP, if KO’d this way, Glomgold gains 1000 energy.

The Max HP stealing has a chance to fail against enemies above level X.

Green Skill: Getting Richer
Glomgold finds some money on the battlefield and picks it up, healing himself for X HP, cleansing himself, gaining 6 stacks of Hardy, and increasing his Basic Damage by X for the remainder of the wave.

Glomgold steals newly gained buffs from enemies every 4 seconds. Every time this happens enemy which was robbed from a buff takes X True Damage and becomes stunned for 6 seconds.

Glomgold’s basic attacks now steal 2 buffs from damaged enemies. Every time Glomgold steals or removes buffs from enemies he gains X Basic Damage and X Skill Power. Enemies which has stolen buffs from any source gain 1 stack of Fatigue for every stolen buff.

This is an incredible concept, I love how you incorporated all of Glomgolds appearances. Although, this seems more like a control hero

He’s on the way to become richer better damage hero than Scrooge!

Wow that is very clever lol

He’s on the way to become richer better damage hero than Scrooge!

Hopefully he is isn’t better than Daisy…

I like it! Glomgold is a must-add for the game. He would complete the Ducktales collection

I made a concept of this

He is basically a super cool tank with megataunt