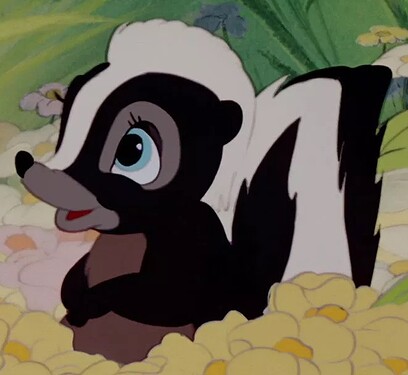 When Flower steps into the battlefield, you’d better be ready for the mother of all stenches. He may be coy, but deep down, he’s definitely got some taste for thrill.
Trial Team: Red
Role: Backline Control
Stars:

Quote: “You can call me Flower if you want to.”

Animations:
Entrance: Flowers bloom in the battlefield, and Flower stands up out of them.
Victory: Flower blushes.
KO: Flower gasps in panic, while the flowers wilt.

Green Skill - Sneak Attack
Flower gets back down into the flowers and pounces, scaring the frontmost enemy for 4 seconds and dealing X damage.

Blue Skill - Shy Shield
Flower cracks a blush and tries to hide it with his tail, granting X shield to himself and the weakest ally.

Friendships:
Flower + Bambi
Campaign: Dollars and Scents - Flower feels insecure about his skunk smell, and wants to get rid of it completely, so he and Bambi go to a fragrance shop to try out some more refreshing scents. Eventually, Bambi tells him about the skunk smell representing his uniqueness.
Disk: Mephitidae No.5
Disk Memory: Flower grants allies X HP each time he is hit while performing his “Shy Shield” skill.
Disk Power: Z energy gain
Allies: Baloo, Fred, Gonzo

Flower + Yax
Campaign: Yoga Class - Flower spots a yoga class and tries to replicate the moves, but does not feel like joining the group. Yax asks him to give it a whirl and see if he’s really into it. As it turns out, he’s completely onboard.
Disk: Home Stretch
Disk Memory: Flower’s “Sneak Attack” skill steals X armor.
Disk Power: Z HP gain, Z shield power
Allies: Simba & Nala, Sisu, the Rocketeer

He is. It’s a common misconception.

Man, the eyelashes really throw you off, don’t they?

I got fooled from both eye color and eyelashes, lol

So does the name. Flower isnt exactly a common name for males. Granted, it’s not his real name, we never actually figure out what his real name is.