I admit I’ve hit a wall on friend mission at lvl 41 and b1 heroes. Granted, it’ll go away once I reach b2 on most of these heroes, but as it stands some of these missions have way stupider requirement.

I’m not a noob as I’ve been clearing WT om hard since day 2 (with a lot of restarting, but who doesn’t)

For example Ralph + Violet being the worst offender. The very first mission gave me a really bad feeling due to their damage and enemy composition. Sure enough, I’m stuck at mission 1-3. Yes, I couldn’t even unlock their friend mission, because their damage is god awful and the enemies selfheal.

Same goes for the other missions attached in the screenshot, where I won’t be able to progress till they are either b2 or 3 star. I’m serioisly hoping it’s not the case for future friend campaign because it sucks to be stuck on 30/30 friend stamina. 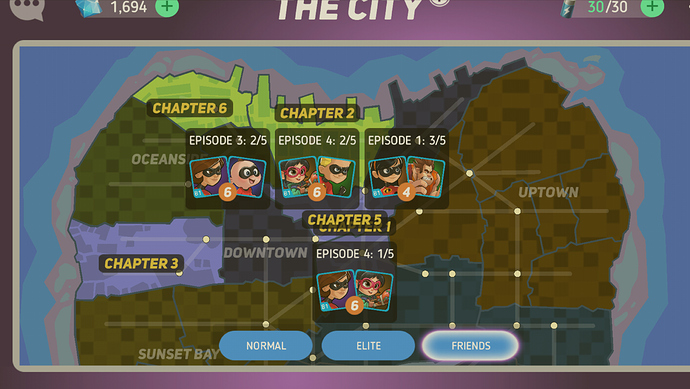 You may find yourself stuck quite a bit in the beginning since you probably do not have a huge roster of heroes. But as you unlock more heroes, you’ll end up with so many friend campaigns that you will not have enough stamina to finish them all at once.

(speaking from personal experience at level 57)

I also suggest joining a guild with decent perks that allow the cap to be higher than 30. (my guild perks extended the cap to 60)

Like I’ve said, the issue isn’t about more heroes. If I’m stuck on 1-3 for Ralph/Violet, you know something isn’t right in the difficulty scaling, given that both of them can be unlocked fairly early, and there’s no 3rd hero slot in the first episode.

The solution’s easy - wait for a few days/weeks while you evolve ralph/violet, then do the mission easily.
Friend campaigns aren’t ment to be cleared without a hassle.