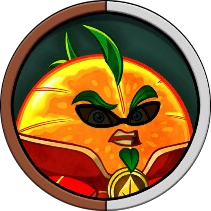 “I’ve come from the future. Where I was originally the simplest of oranges. But that was before…my origin story.”

Citron is a bounty hunter orange from the far future who traveled back in time to help his allies fight against evil.

Role: Tank
Position: Front
Trial Team: Yellow
Entrance: Rolls into position
Victory: Smiles and looks at the camera
Defeat: Falls over and attempts to get back up
Attack: Shoots a laser

White Skill: Peel Shield
Citron actives his peel shield, granting him and his allies a shield that has X HP that lasts 10 seconds, and also grants his team X armor and reality for the rest of the wave.

Green Skill: Citron Bowling (Normal Damage)
At the start of combat, Citron rams into the enemies in his ball form, dealing X damage and knocking them back. If enemies take 20% of their max HP with this skill, they are stunned for 7 seconds.

Blue Skill: E.M.Peach (Fantastic Damage)
Citron shoots an E.M.Peach at the “Most Wanted” enemy, dealing X damage, stunning them and nearby enemies for 5 seconds, and removes 3 active buffs with the longest remaining duration. This stuns for 1 second longer with each subsequent use.

The stun and removing buffs have a chance to fail against enemies above level X.

All shields on Citron’s team reduce damage taken from normal damage sources by 50%.

Red Skill: Peeling Out
If Citron or his allies were to take 40% of their Max HP in a single hit, the damage taken is converted into a shield that lasts 10 seconds.

When allies are shielded, their basic damage and skill power is increased by 200%.

The boots is less effective on allies above level X.

That disk name made me laugh