Refuses To Be Nerfed 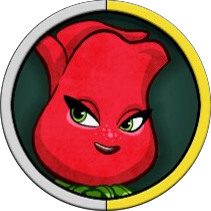 “I am rose, a sorceress. We speak thanks to my magic.”

The sweetest smelling sorceress you’ll ever meet, Rose uses his magical powers to control her enemies.

While Rose is in arcane enigma form she cannot fall below 1 HP. Rose also cannot use any other skill while in her enigma form and can only use her basic attacks.

If the enemy is already an animal before rose can use “Goatify” then their transformation is extended by 5 more seconds.

Jinxed enemies receive the same amount of damage that they dealt back to them.

The jinx has a chance to fail against enemies above level X.

Red Skill: Photosynthesis
Rose and her allies heal X HP per disable on enemies, and gain 45 energy when damaging a jinxed enemy.

Whenever an enemy is KO’d, their debuffs are copied onto remaining enemies. This ignores all evasion, tentiacy, and Hardy stacks.

This effect has a chance to fail against enemies above level X.

Merlin (156)
Magical Mayhem
More Goats
+Skill Power
• “Goatify” now transforms 2 additional enemies into goats and the duration is X (+1 per star level) second(s) longer.
• When an enemy turns back to normal, they lose X skill power or basic damage depending on what their skills are scaling off.
• Enemies are dealt X damage per second while they are a goat.

Malificent (160)
Cursed Thorns
Stronger Enigma Form
+Damage to “Arcane Enigma”
• “Arcane Enigma” duration is increased by X (+1 per star level) second(s) if she KO’s an enemy.
• Rose can use “Goatify” and “Time Snare” while in enigma form.

She used to be the strongest character in GW2 before sho got nerfed, so the title is kind of inaccurate. I might change it if I have to.

What would you rate Rose’s concept?