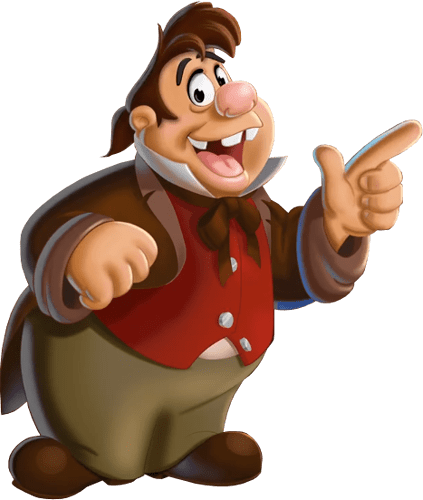 “Who? You? Never! Gaston, you’ve got to pull yourself together.”

Entrance: lefou walks into the battlefield with a torch in his hand

Defeat: a pile of snow falls on lefou as his torch falls to the ground

Lefou rallies his allies to fight, this increases the attack power and speed of all allies by 100% for 10 seconds while also increasing their crit chance by 50% for those same 10 seconds.

Lefou sings the praises of the ally who deals the most damage in battle, increasing their max HP by X amount and making that ally immune to debuffs for 5 seconds.

When below 20% of his HP, lefou poorly disguises himself as a snowman which makes him untargetable for 10 seconds. when those 10 seconds are up, lefou gains X health and X attack power.

Lefou takes 30% less damage for every ally that is still standing on the battlefield during each wave.

Lefou now gains 50% movement speed when he is buffed by any source.

Lefou/Olaf
The new snowman in town
unavoidable freezes while disguised

I think this also happens, they are also voiced by Josh Gad, although Lefou is him in the live action movie.