Get it together (Unlikely concept) 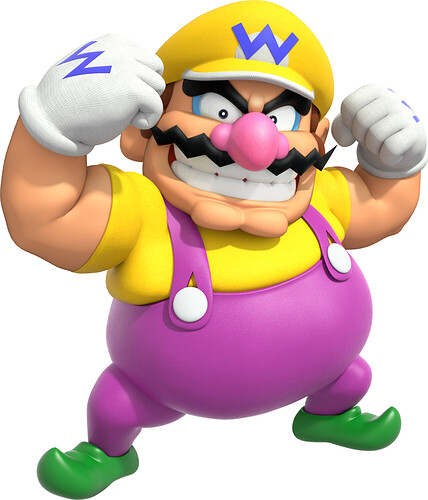 Wario uses brute strength and greed against any foe in the battlefield, no matter what the enemy team throws at him, he’s gonna win!

Entrance: Wario rides into the battlefield in his car and hops out while the car dissapears

Victory: Wario flexes both his muscles while smiling

Defeat: Wario falls onto his chin

Wario farts on the enemy team (ew) which creates a large stink cloud that damages enemies overtime by X amount for 6 seconds, stuns each enemy caught in the cloud and inflicts 2 stacks of fatigue to each enemy.

Wario shoulder bashes the nearest enemy, dealing X damage to that enemy, knocking the enemy back and giving wario a shield for X amount if he ko’s an enemy with this skill.

Wario munches on some garlic, healing himself for X amount, making himself invincible for 5 seconds and granting himself 2 to 3 random buffs if he is already invincible.

If an ally has energized on them, then the energy gained from the effects of energized are doubled by 20%

The shield gained by wario from “shoulder bash” now increases his attack/movement speed by 100% once it is destroyed.
+X skill power
+X damage to “Shoulder bash”
+X armor

When an ally gains energized, it has a 40% chance to activate twice.