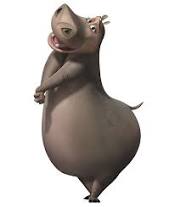 Description: A hippo with a lot of sass, Gloria’s about the show the creeps who’s boss
Quote: “Don’t make me come up there. I’ll get a whoppin on both y’all!”
Stars: 2
Trial Team: Blue
Entrance: Gloria will bust out of a crate wearing a bikini made out of sea animals and sea plants, before shaking it off and getting ready for battle

Victory: Gloria will cheer
Death: Gloria will get angry and cross her arms before stomping her foot
Role: Frontline Damage

White skill: Pepper Charge: Fantastic Damage
Gloria will eat a pepper causing her to dash forward in a stif arm position. This will deal X damage to each enemy hit and knock back all enemies hit

Green skill: Hippo Tumble: Fantastic Damage
Gloria will summer-salt to the furthest enemy, dealing X damage and decreasing the enemy’s skill power by 20%. Gloria would stay in the enemies backline after using this move

Blue skill: Hippo Hop: Fantastic Damage
Gloria will jump into the air and slam the ground with her behind, knocking all enemies back and dealing X damage. This will also stun enemies for 10 seconds, any enemies that are stunned will be dealt a bonus X true damage

Purple skill: Hippo Hijinks
All of Gloria’s skill now stun enemies for 5 seconds except for her “Hippo Hop” skill

Red skill: Who’s the Boss
If any stunned enemies are damaged by Gloria’s basic attack, their stun time is increased by 2 seconds. Along with this, Gloria will deal

Gloria and Melman
Disk: Perfect Date
Gloria will deal 20% more damage when she has a shield
Gloria and Melman want to go on a date but there’s not much options for animals
Allies: Swedish Chef Tigger Goofy

Gloria and Daisy Duck
Disk: No nonsense kinda gals
Gloria will gain a shield with X health after KOing an enemy
Gloria and Daisy go on a girls night after meeting at the city mall
Allies: Minnie Mouse Kida Belle

I’ll try, I’m pretty disappointed in this one so I’m going to take a break from Madagascar concepts/DreamWorks concepts. I’ll doing some peanuts and big city greens concepts