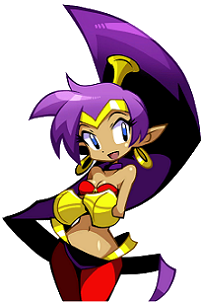 “Half a genie is better then none after all”

Shantae uses her transformations to keep enemies on their toes

Defeat: she falls onto the ground

Monkey: attacks by scratching the enemy and gains a small speed boost when the transformation ends.

Elephant: charges at the enemies which deals x damage and knocks back the enemy hit and gives shantae 40% armor.

Harpie: attacks by kicking the enemy and gives herself a attack boost for 4 seconds.

Shantae kicks the nearest enemy, dealing x damage to that enemy and knocking that enemy back a small distance

Shantae turns into a crab and snips at the nearest enemy, dealing x damage.

Each of shantaes transformations have a new effect

Monkey: increases shantaes attack speed overtime for how long she is in the form

Elephant: gives a shantae a shield for x amount when the transformation ends

Harpie: deals x more damage when given a buff

What do Rapunzel and Genie got something in common with her?

Shantae is a half genie and genie is a genie