He can do anything (Unlikely remake-cept) 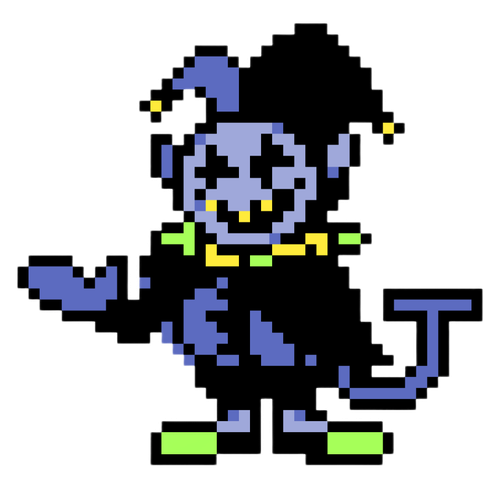 “MY HEARTS GO OUT TO ALL YOU SINNERS!!”

See the devilsknife, see the curtains on fire, jevil’s on the battlefield ready to unleash chaos on any enemy he desires

Entrance: Jevil teleports into the battlefield with his hand raised and then he laughs

Defeat: Jevil gets tired out

Jevil summons a group of devilsknifes from the sky which rains down on the enemy team, each devilsknifes deals X damage and halves the armor of each enemy they hit by 60%

Then a final giant devilsknife falls down and slices through the whole enemy team, dealing X damage to all foes, decreasing 100% armor and X energy from each enemy and applying 3 stacks of “weakness” to each enemy.

Green: All you sinners

Jevil summons two bombs which he then drops on the two enemies with the highest armor, the club bomb deals X damage to the foe and stuns the foe for 8 seconds while also shooting out clubs that deal X damage to other nearby enemies

The heart bomb deals X damage to the foe and charms the foe for 8 seconds, it also shoots out hearts that deal X damage to other nearby enemies while also having a 45% chance to charm each foe as well.

Blue: Catch me if you can

Jevil makes a silly face as he launches a volley of 5 small spade bullets at the nearest enemy, dealing X damage to the foe and knocking the foe back.

He does this attack 3 times to the same enemy.

The club bomb from “All you sinners” has a 75% chance to inflict an extra random disable onto the target enemy.

“My final chaos” now deals X extra damage per each stack of weakness on each enemy when preforming this skill.

Disables dealt out by allies are now doubled when they are under 45% of their health.