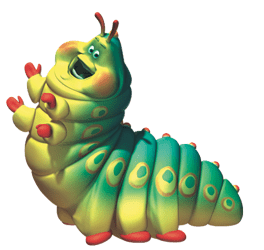 Quote: “Some day, I will be a beautiful butterfly, and then everything will be better.”

White Skill - Tuck and Roll - Normal Damage
Heimlich jumps onto a cannon that shoots Tuck and Roll at the two enemies with the most HP, dealing X damage to each one. Tuck and Roll then perform their pop-up performance, giving X HP to all allies below 25% their max HP.

Blue Skill - Baby Wants Pie
Heimlich throws a pie at the strongest enemy, slowing their attack speed by 40% for 12 seconds.

Purple Skill - Beautiful Butterfly
All allies healed by Heimlich’s “Tuck and Roll” skill have their attack speed increased by 30%.

Red Skill - Empty Stomach
At the start of each wave, Heimlich is immune to debuffs for 9 seconds, and all HP or energy he gains is doubled.

Heimlich + Timon & Pumbaa
Campaign: Get Some Grub - Timon and Pumbaa’s grub diet has to go. The last thing they want to do is traumatize Heimlich. So they join Heimlich in testing out different culinary palettes.
Disk: Special Tip
Disk Memory: Heimlich’s “Tuck and Roll” skill slows down one of the two targeted enemies’ attack speeds by 30%.
Disk Power: Z energy gain, Z max HP