This concept is my submission for the concept contest as I was running out of time and this was already made. 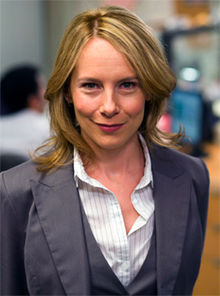 Holly Flax is sweet and simple, like a lady baker, but her quirky behaviour allows her to support her allies properly.

“I nearly fell asleep when he gave me a tour of the files.”

Entrance: Walks in reading a binder

Victory: Bows her head slightly and gives a smirk

Defeat: Bursts into tears as she covers her face with a hand

White Skill: DJ Jazzy Flax
Passive: Instead of a standard basic attack Holly reads her binder healing herself for X HP. Holly also has a 100% chance to heal all heroes of a specific role for the same amount she heals herself.

Active: Holly begins to beatbox increasing her and her allies tenacity by 150 for 7 seconds and increasing their basic damage by 150% for 7 seconds. Allies who take more than 25% of their Max HP as damage while buffed by this skill are given a shield with X HP for 12 seconds.

Fantastic Damage
Once every 12 seconds Holly gives the enemy team an ultimatum. If the enemy team deals a total of X damage in the next 5 seconds they are all dealt X damage. If they do not then all allies are shielded for 50% of their Max HP for 8 seconds.

Blue Skill: Let’s Get Ethical
Holly puts on her ethics seminar headband and jogs on the spot invigorating her allies. This grants Holly and allies 150% attack and movement speed for 8 seconds.
This buff is less effective against allies above level X.

Purple Skill: Doing Your Job
Holly and allies heal X HP every time they lose a buff either from the buff expiring or being removed or stolen by another source.

Red Skill: HR Holly
Attack speed buffs on Holly don’t expire while she is above 30% of her Max HP.
This has a chance to fail on buffs applied by allies above level X.
+X HP Healed from DJ Jazzy Flax
+X Skill Power
+X Reality

Battle Badge
Is Charged in Battle When:

Holly and The Rocketeer
Slow enemies when damaged