How Many Concepts Have You Read in Your Life? - Dio Brando(Unlikely Concept) 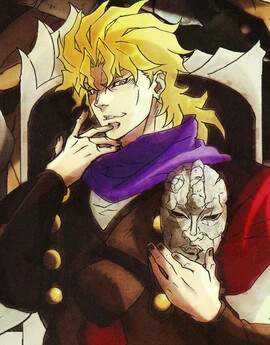 Position and Role: Frontline Damage Hero
Trial Team: Red
Mastery Collections: Damage, Healer(?)
Entrance: Slowly descends from the battlefield ceiling to his position.
Victory: Smirks at the enemies.
Defeat: Is disintegrated while screaming “Wryyyyyyyyyyyyyyyyyyy”
Basic Attack: Slaps nearby enemies.
Description: Feeling useless today? You might be facing Dio, the narcissistic vampire that will use his opponents to heal himself and show how “superior” he is.
Quote: “I reject my humanity, JoJo!”

Active: Dio secretes a high pressure fluid out of his eyes that passes through enemies, dealing X damage and applying 1 Stack of “Useless” to the enemies it hits. 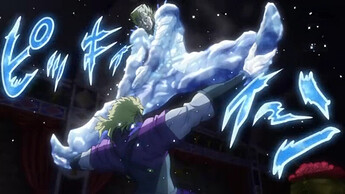 image798×449 80 KB
Dio dodges a melee attack and holds the closest enemy, freezing them for 10 seconds and applying 2 stacks of “Useless”. Enemies Frozen by this skill are dealt X damage per second while Frozen. Dio can dodge a melee attack once every 8 seconds.

TRUE Damage
Dio jumps to the enemy with the most HP, then grabs them, applying 2 stacks of Useless and absorbing their life, dealing X damage to that enemy and healing himself for X HP.

Dio Brando + Scar
Campaign: Long live The King: Dio offers to Scar the gift of immortality, who suspects that it would turn him into one of Dio’s henchmen.
Allies: King Louie, The Evil Queen, The Queen of Hearts
Disk Name: Scratched Stone Mask
Effects: +X Skill Power per Stack of Useless on the battlefield; +10% Improved Healing
Stars: Enemies with stacks of “Useless” that are dealt more than 25% of their max HP as damage in one attack are Silenced for 4(+2 per star) seconds.

Dio Brando + Lock, Shock & Barrel
Campaign: Faithful Servants: Lock, Shock and Barrel cannot help but feel amazed by Dio, so they start following him around. Dio, of course, loves the situation and uses them to gather information about the city.
Allies: Kronk, Oogie Boogie, Yzma
Disk Name: Frozen Sack of Potatoes
Effects: +X Skill Power; +50 Fantastic Crit
Stars: Enemies that receive a critical hit while having a Stack of “Useless” are Scared for 8 seconds. Dio does 5%(+5% per star) of the fantastic damage he deals as TRUE damage to Scared enemies.

6 Likes
Thred's Ocean of Concepts
This Concept Will Be a Golden Experience For You - Giorno Giovanna(Unlikely Concept)
Ashketchum95 April 22, 2021, 4:19pm #2

My problem with making a DIO concept is that it would be almost the same as a Jotaro concept, so I decided to go with Part 1 Dio instead