I noticed that I hadn’t made an Unlikely Support yet, so I decided to go with this one. Feel Free to leave any feedback! 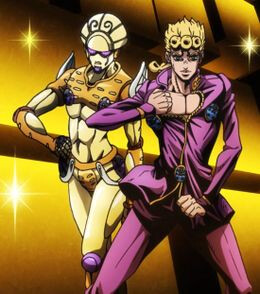 Giorno is a 1 Star Midline Support Hero whose Trial Team is Red.
“I, Giorno Giovanna, Have a Dream.”
The life energy is running through the battlefield: healing allies, creating living beings and slowing enemies down! It’s Giorno Giovanna and his Stand: Gold Experience!

Passive: Each 3 basic attacks, Giorno also applies life energy to the ally with the least HP, healing them for Y HP.

Active: Gold Experience punches enemies 14 times, dealing X damage per punch and giving to the enemies it hits a 50% movement and attack speed debuff for 10 seconds.

Life Will Always Protect Itself

Giorno creates a tree in front of the frontmost ally(This Includes himself), granting them reflect for 10 seconds. Enemies that hit allies with reflect receive a -50% attack speed debuff. When the reflect wears off, the ally is healed for X HP.

Every 5 seconds Giorno converts a debuff from a random ally or himself into a buff, and heals that ally for X HP. If the debuff cannot be converted directly(like a disable, for example), Giorno will switch it with 1 Stack of Hardy.

Life Energy Distribution
Every time Giorno or his allies damage a Slowed enemy, they gain X Armor and Reality.

Vento Aureo
Member Regeneration can now convert a debuff once every 3 seconds.
Allies that are healed by Giorno also gain Z Skill Power and Energized for 10 seconds. Allies energized by Giorno gain 75 energy everytime they hit an enemy with their basic attacks.

Additional Stat Boosts:
+Z Basic Damage per active buff on allies
+Z Skill Power
+Z Reality to Allies and himself every time a debuff is converted

Giorno Giovanna + Mr. Big & Koslov
Campaign: From Boss to Boss: Giorno, as the boss of the mafia Passione, goes after Mr. Big to negotiate what they can do in the city. Selling drugs, of course, is unacceptable to Giorno. When Giorno arrives, Koslov tells him that Mr. Big is sick and is not in conditions for negotiating. Giorno then offers himself to heal him with his powers.
Allies: Rapunzel, Tron, Sully & Boo
Disk Name: “You Have my Word, Kid”
Effects: +X Skill Power; +Y Max HP
Stars: Enemies that are slowed while disabled have their disables extended by 2(+1 per Star) seconds.

Giorno Giovanna + Dio Brando
Campaign: Family Reunion: Giorno meets Dio for the first time while in the city. Even though Giorno hated him, he still wants to know more about his family and starts asking about it. After the explanation, Giorno is still confused as to how he is both Dio’s and Jonathan’s son.
Allies: Jonathan Joestar, Joseph Joestar, Jolyne Cujoh
Disk Name: Convoluted Family Tree
Effects: +X Skill Power to Red Team allies; +X Reality
Stars: Allies that are healed by Giorno receive “Birthmark”(The Icon is a Star) For 2(+2 per star) Seconds. Birthmarked allies cannot be K.Oed while there is another ally with “Birthmark” on the battlefiled, and gain +50% Skill Power per allies with Birthmark.