Remake-cepts are gonna be normal for me for the next few…I don’t know how long, anyway…here’s a big bad wolf! 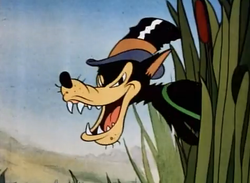 The big bad wolf brings his trickery, his huffing and puffing and his huge appetite to the battlefield.

Entrance: Big bad wolf sneaks into the battlefield and licks his lips (Until B0)

Victory: Big bad wolf grins evily as he pulls out his fork and knife seemingly ready for a feast.

Defeat: Big bad wolf tries to huff and puff but he runs out of breath and slinks to the ground in a tired state.

Active: Big bad wolf blows the enemy team away with a large gust of blowed wind until his energy runs out, dealing huge knockback to all enemies, dealing X damage per second and applying one stack of fatigue per each second.

Big bad wolf pulls out a knife and fork and jabs them into the nearest enemy while licking his lips, dealing X damage to the enemy, healing the big bad wolf for X amount and scaring all other enemies for 6 seconds.

At the start of every wave, big bad wolf sneaks into the battlefield in his sheep in a basket disguise and stays motionless in the basket in his position for 5 seconds. While in the basket, damage dealt to him is reduced by X% and he is immune to disables.

Once 5 seconds have passed, the wolf jumps out of the basket and scares all enemies for 6 seconds while also dealing X damage to each enemy.

All scares dealt to enemies now inflicts “lifesteal” on the scared enemy for until the scare wears off.

Disables from scared enemies are now blocked on allies for as long as each enemy is scared.

Healing done by the big bad wolf or his allies now increases their crit chance against scared enemies by 30%.
+X skill power
+X damage to “Hungry like a wolf”
+X reality

Story: Big bad wolf teams up with known hunter gaston in order to mooch a meal off of him during his next hunt

All knockback dealt to enemies now drains 45% energy from each enemy.

Story: Bunsen and beaker decides to use the wolf’s strong winds in order to run some experiments while getting him board with the promise of a free meal…with destructive results.