I was in the arena, and this person has the same exact team power as me! 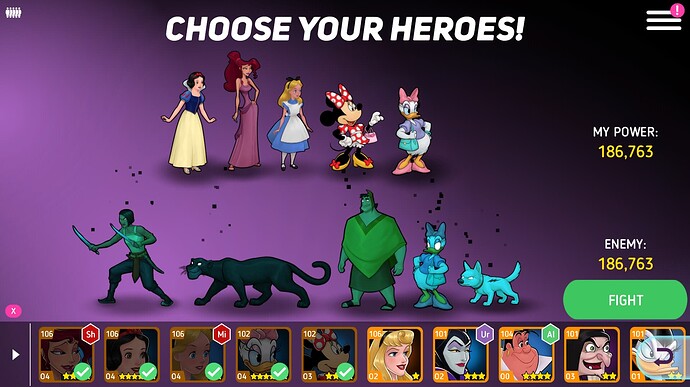 I just fought them and lost

Well, the odds are randomized. If you had any higher than that, you’d have a higher chance of success, and less would mean less. In this case, it was pretty much a coin flip.

Power is much, much less important in deciding which team wins than the heroes being used and how well they work together. If you watch the fight as it happens, you can see how they beat you and maybe figure out a way to stop it and gain the advantage by using different heroes.

Entirely possible, but to address the losing part, I would agree power isn’t everything. In war, even my lineup with a lower combined power rating could not be defeated, at most it’s 1 hero. So, the power is a coincidence, but the skills may make a difference. So even though power is similar, the skills cause greater damage. Moral of the story: Power isn’t everything.

Nah, power is absolutely irrelevant and you are using far weaker heroes than your opponent.

Pacha and Bolt alone kill you easily. Bagheera and Namaari are a “good pepper” and Daisy - well Daisy sucks, I will tell you that much.

1st off, many people think of Megara as an S tier hero, and she does no damage as a support hero, Alice is pretty good if you promote her well, I am trying to eliminate Daisy and use Yzma (But I don’t have Yzma yet), and I have recently eliminated Minnie, and use Aurora instead, if you have any heroes I can use feel free to tell me, the only characters I need are: Mike Wazowski, Yzma, Flik, Jafar, and Hank + Dory.

You need some strong, fast damage; Megara with her Shank disk (once you get 4 or 5 stars on it) really is S-tier or very close to it, but only if she’s supporting an S-tier hero. You need Shego, Ron, Pacha, Zeus, or Bolt on your team, and they need to be the front-most hero so Megara links to them.

I am using Shank and Megara’s disk, I finished her campaign stage, I have it at 3 stars

), I will need to replace her, I am already not gonna use Minnie & Daisy anymore, Aurora hasn’t been ranked and neither has Snow White, so I will use Megara with Shank’s disk, Yzma with Ursula’s disk, Aurora with the Fairy Godmother’s Disk, Snow White with Ariel’s disk, and I am unsure about the last person.

And Megara is only good if she supports something good, not trash. Otherwise she becomes trash as well…

Well with Yzma being A tier if I link them it work, because neither of them are trash, Alice is D tier which is really bad, so i’m done with her, I could use Ariel as my last person because she is ranked S tier!

Yzma being A tier

because she is ranked S tier! 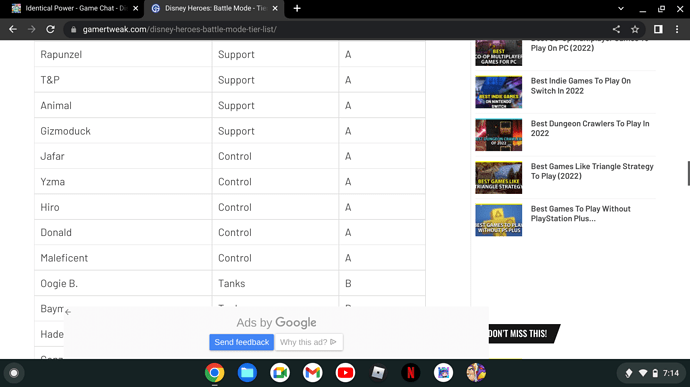 This is VERY outdated tier list. Nobody from them apart of Timon are A tier, Maleficent is even D tier from longer time too…

really? I did not know that.