It's just the professor (likely concept) 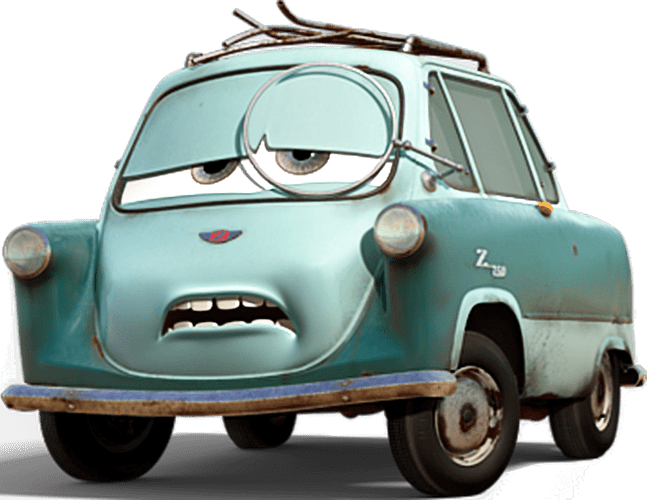 “Allinol must be finished for good. McQueen cannot win the last race. Lightning McQueen must be killed”

Entrance: he drives into the battlefield as a electromagnetic pulse weapon (disguised as a camera) appears in front of him

Victory: he smiles as he admires his handywork

Defeat: he gets angry and stomps his tire as the weapon breaks

Passive: instead of a normal basic attack, professor z instead activates and aims the camera weapon at the enemy chosen by the player, this enemy will be continuously damaged for 20% per second, have their energy drained every 4 seconds and will be unable to dodges attacks while the camera is on them.

If the foe is below 35% of their max HP, this skill will instantly KO them no matter if they have a shield or not.

A lemon minion drives through the battlefield only stopping to unleash a blowtorch onto the enemy team, dealing X continuous damage for 10 seconds and inflicting 2 stacks of fatigue to them as well.

The lemon then drives through the enemy team, dealing X damage to each enemy he passes through and knocking them back as well.

Professor Z presses a button which then activates a secret bomb in the enemy team, scaring foes for 5 seconds. after those 5 seconds, the bomb will explode on the enemy with the least HP which deals X damage to each foe in the blast radius and destroys 1 buff from each enemy as well.

This move deals more damage to the enemy that has the death ray pointed to them.

“Back-up plan” deals an extra X damage to enemies with more then 3 buffs on them.

Whenever an enemy goes under 50% of their health while they have the camera weapon pointed to them, their HP is drained 45% faster and they are prevented from gaining any buffs.

“Long live lemons” now has a 70% chance to summon 2 lemons instead of one which deals the same amount of damage that the first lemon deals.
+X damage to “Racing sabotage”
+X skill power
+X attack power

Professor Z’s crit chance is increased by 25% per the number of allies still on the field.

Each stack of fatigue now decreases the armor of an enemy by 20% per stack.

A clever concept! I especially like how you used the “camera” as a unique effect (reminds me of Manticore’s passive effect) and the Friendship Campaigns!