It's the Little Things in Life... - Flik (Likely Concept)

An ambitious little ant working to create devices to fight back the creeps, Flik bumbles and stumbles about the battlefield, wreaking all kinds of havoc with his irksome inventions!
Role: Control
Position: Back
Trial Team: Red

“Ants don’t serve grasshoppers! It’s YOU who need US! We’re a lot stronger than you say we are…and you know it, don’t you?” 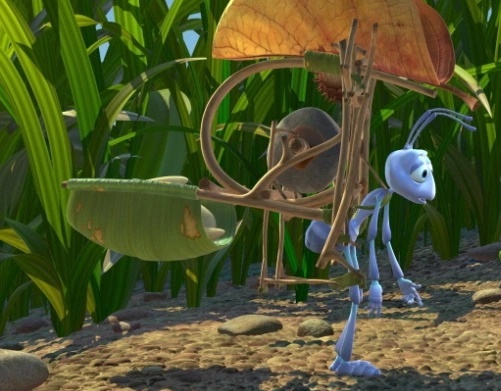 Entrance: Flik, encased in his modified “grain harvesting” device–now called a Creep Harvester–rushes and stumbles into frame, depositing a large pile of stones beside him and adjusting the straps of his device before looking at the enemy team with a determined expression.

Basic Attack: Flik tosses one of the stones into his Creep Harvester, pulls a lever, and the stone is hurled with prejudice at a random enemy.

Victory: Flik jumps for joy, but his Creep Harvester tips forward, causing Flik to fall on his face buried by his own invention. He raises a…passably triumphant fist and wears a pained smile anyway.

Defeat: Flik’s Creep Harvester falls to pieces all around him, causing him to shriek and cower in fear.

Green Skill: Terror of the Skies (

Disk #1 - "Small Soldiers"
Flik wants more than anything for the major heroes of the City to acknowledge him and his desire to protect people from the creeps, but more often than not, he gets categorized as one of the citizens who need protecting rather than doing the protecting. He seeks advice from the famous Basil of Baker Street–a fellow hero of short stature, but one who is admired for his ingenious creep takedown tactics. Basil tells Flik that it’s all about using his small size to his advantage, and offers to let the ambitious insect shadow him on one of his nightly patrols. But once he sees the ungainly devices Flik intends to use, Basil begins to have second thoughts…

Disk #2 - "Net Working"
Proud of his Creep Harvester, Flik learns that a gathering of the City’s brightest inventors is occurring this week, and he decides that he HAS to go! He is greeted by Belle and her father, Maurice, who help Flik get registered and offer to show him around to meet some of the other inventors. But trouble arises when Syndrome raids the convention, releasing sinister drones that attach themselves to many of the inventors’ digital machines and bend them to their new master’s orders. Syndrome reveals that he plans on taking these nice anti-creep devices and selling them on the Black Market to make a fortune! Flik and Belle, whose analog inventions aren’t affected by the drones’ reprogramming, take it upon themselves to track down Syndrome and put an end to his scheme!

Great concept as always! And the Green Skill is just amazing, I love characters that alter the environment(like King Louie)

Great concept as always! And the Green Skill is just amazing, I love characters that alter the environment(like King Louie)

And yes, for all the 90s kids out there, I was sorely tempted to make one of Flik’s abilities “Gold Berry,” and to make its text merely “I could do some damage with this!”

The temptation was strong, but I had to resist it.

White skill by pb is similar to green, great job

This is a revival that makes sense since Flik just got announced yesterday. Not all dead topic revivals are bad.

I’m… not sure what you’re trying to get at here. Yes, Flik was announced. Such is the “risk” of making likely concepts. So what?

That’s about it tbh