This is my Unlikely submission to @Scarlet_Captain 's Concept Contest and also my first try with Battle Badges. Feedback is appreciated. 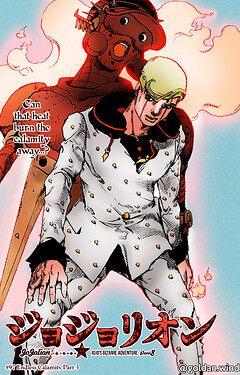 Collections: Damage and Stun
Entrance: Walks into the Battlefield and summons Speed King
Victory: Cheers with one of his pet beetles
Defeat: Shaves his left eyebrow
Basic Attack: Speed King punches the closest enemy
Description: Jobin Higashikata is here to accumulate a stunning heat in his enemies with his powerful stand: Speed King.
Quote: “This world, including Morioh, is crazy. And the one thing you can be certain of in this mad world… is that the one that wins is the one in the right.”

Active: Jobin uses Speed King to concentrate heat into to the battlefield, lighting a fire that deals X damage to all enemies, stuns the enemies with stacks of Heat for 8 seconds and applies 2 stacks of Heat to the enemies that didn’t have them already.

Fantastic Damage
Jobin grabs the closest enemy with Speed King and concentrates heat, applying 6 stacks of heat to that enemy, dealing X damage and stunning them for 10 seconds.

Fantastic Damage
Jobin concentrates heat in his wallet and throws it at the enemy with the least HP, dealing X
damage and applying 4 stacks of Heat to them. If there’s a stunned enemy on the field, Jobin will rather target them with this skill, and the stun will be extended by 4 seconds.

Stunning Heat
The stun duration in enemies with a stack of Heat is extended by 0.4 seconds per stack of Heat in the enemy field. Jobin deals X with his skills and basic attack more damage to enemies that are either stunned or with stack of Heat.

Everyday is a Summer Vacation
Every time an enemy is stunned, 1 stack of Hardy is applied to Jobin.
The damage over time done by the stacks of Heat cannot be blocked by shields or reflected.

The Reflect ignoring might fail if the ability that granted the reflect is above level W
Other stat Bonuses:
+X Basic Attack
+Y Skill Power
+Z Damage per second done by each stack of Heat.

Is charged in Battle When: Damage Over Time is applied to 4 enemies

Jobin Higashikata + Pleakley
Campaign: Insect Enthusiasts: Jobin and Pleakley go after a rare beetle that is said to live in the city, and discuss if it should be added to Jobin’s collection or sent to a study facility.
Allies: Jumba, Scrooge McDuck and Mr. Big & Koslov
Disk Name: Rainbow Beetle
Abilities:
Disk Power: +X Basic Attack per stack of Heat on the field.
Memories: Every a stack of Heat is applied on an enemy, they are scared for 4 seconds(+1 per star)

Jobin Higashikata + Swedish Chef
Campaign: Eccentric Taste: Jobin goes after Swedish Chef to ask him to make an expensive and eccentric dish.
Allies: Linguini & Remi, Collete, Genie
Disk Name: Blodpudding
Abilities:
Disk Power: Jobin and his allies gain X Skill Power every time an enemy is stunned.
Memories: Every 5(-1 per star) times a stack of Heat is applied to an enemy, 1 stack of Fatigue is applied to them.