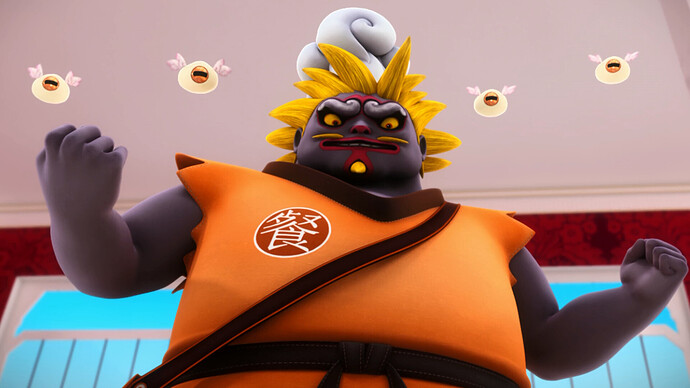 “Foolish girl, you are not eating soup, you are soup!”

Entrance: a flying rice ball projects an image of his un-akumatized self before the rice ball flys upwards revealing kung food who pulls out his sushi tonfas.

Defeat: kung food gets knocked out as his hat flys off

Kung food let’s the two frontmost enemies taste the soup that was messed with, controlling (aka charming) the two enemies until his energy runs out and granting kung food 2 buffs from each controlled enemy.

Whenever an enemy gets close enough to kung food, he pulls out a dust of red pepper and blows it at the enemy, blinding the enemy for 7 seconds, if the enemy is already blinded, then kung food steals X skill power from the enemy and increases the duration of the blind by 3 seconds.

Whenever kung food inflicts a disable onto an enemy, kung food gains 2 stacks of hardy and heals himself for X amount.

“Ruined soup” now has a 45% chance to make kung food invincible for 7 seconds while also increasing his max HP by 25% per each second that he is invincible.

Each stack of hardy increases kung food’s armor by 35%

“Foolish girl, you are not eating soup, you are soup!”

Yeah. But I wonder what does Chloe tastes like as soup.