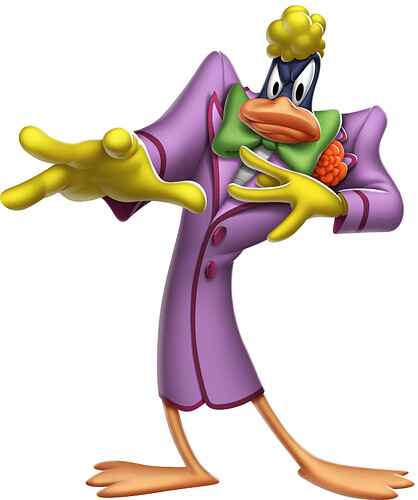 “How different it was in my native village…”

how different this daffy is from other daffy’s, role disabling, easier dodges and buff converting and then there was a stun and a silence

Entrance: Zoot suit daffy runs in and poses before stancing

Defeat: zoot suit daffy frowns before running off the battlefield

Basic attack: zoot suit daffy runs off screen from his side then he sneaks behind and kicks the further most enemy before running back to his position, dealing X damage

Zoot suit daffy rushes off screen then he appears to break the fourth wall as he runs in front of the screen, looks at the screen and poses while a red screen covers the battlefield before he rushes back to his position.

This deals X damage to all enemies while also inflicting disables based on what role each enemy is on the battlefield.

Tank and damage: stuns the enemy for 10 seconds

Control: silences the enemy for 10 seconds

Support: blinds the enemy for 10 seconds

Zoot suit daffy increases the dodge chance of all allies by 50% while also healing the ally with the least amount of health for X amount and making that ally invincible for 10 seconds.

the dodge chance is less effective on allies above LV Z

Whenever an ally dodges an attack from a enemy, zoot suit daffy converts 2-3 buffs into debuffs and gives the same buffs before he converted them to the weakest ally with their duration refreshed.

Zoot suit daffy can only use this move every 5 seconds before it has to cooldown.

Red: And then there was…

“Cucaracha” now gains the following effects when inflicted onto enemies

Tank and damage: decreases 35% armor and 35% skill power from each target enemy.

Whenever zoot suit daffy uses “Shoopity bop”, the cooldown of the weakest allies blue skill is reduced by 50%

I just read the cucaracha and automatically liked it