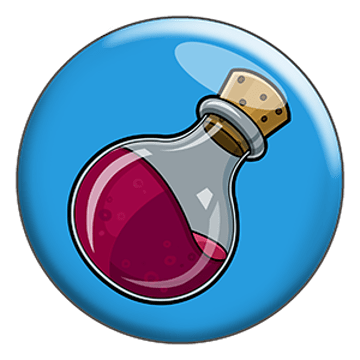 Concept Creator and a Cinematic Animator, LetsGetDangerousBro sets the stage for a very dangerous fight.

Role: Control
Position: Middle
Trial Team: Red
Entrance: Walks into position and gets out his pencil
Victory: Takes out his tablet and it cycles through his concepts, like Kevin Flynn
Defeat: Pencil snaps and he stomps his foot
Attack: Draws a bomb and throws it at the enemy

White Skill: Lights, Camera, Action (Fantastic Damage)
The player chooses which enemy for LetsGetDangerousBro to film. LetsGetDangerousBro gets his clapperboard, snaps it, and begins to film the chosen enemy, charming them until he runs of out energy. Enemies that damage the charmed enemy will be dealt X damage and are blinded for 9 seconds.

The charm cannot be dodged, evaded, or blocked by “Hardy” or passives. While on auto, LetsGetDangerousBro films the “Most Wanted” enemy. The “Most Wanted” status is given to the enemy is dealt the most damage so far.

Blue Skill: Brainstorm (Fantastic Damage)
Once per wave, when LetsGetDangerousBro falls below 40% of his Max HP, he stops attacking and begins to brainstorm until he is at full health again. While he is brainstorming, he heals X HP per second, takes 50% less damage from all sources, and a storm cloud surrounds him, dealing X damage and stunning enemies for 10 seconds if they attempt to damage him. When he reaches full health, he gains 400 energy and he begins to fight again.

Purple Skill: Art Of Animation
Every 3 basic attacks, LetsGetDangerousBro extends the duration of the enemy’s debuffs by 3 seconds and disables by 6 seconds.

This has a chance to fail against enemies above level Z.

Red Skill: Golden Writer
When LetsGetDangerousBro uses “Eraser Shuriken”, he also steals Z basic damage and Z reality from the enemy and grants it to himself.

Debuffs applied by LGDB bypass all Hardy stacks while also removing one.

This has a chance to fail against enemies above level Z.

Feedback is wanted! If there is any mistakes or any edits I should make, let me know!

9/10, really good for a first concept! I hope you make more.

Me game and watch? Ooo I hope he has the judge move!

To start off, this concept is good, the format is fine, and your spelling is great, so this will just be my opinions, which means that they don’t nee to affect you in some great impactful way.

Attack: whacks enemies with his tablet

First little weird thing. Idk, I just wouldn’t wack people with my tablet. I understand how hard it is too come up with a basic attack for some characters, but I just wouldn’t do this, but that is just imo.

There is a lot going on here, imo, just too much. He is like a supportive damaging control. I personally would drop the allies shields, and let them be added for the red skill. But that is just imo.

This skill is fine, once you put a cooldown on it. Ypu cannot have him erasing every single buff, that’s OP, but I see how it could be overlooked, and for a first concept, its no big deal.

Blue skill: Concept Creation
When an ally reaches 25% of their HP, LGDB writes on his tablet, healing the ally for XXXXX hp, and granting them 400% attack speed and XXXXX skill power.

How long does this boost last? Till the end of the wave? Also, does this happen once per ally or as many times as they reach 25% of their max HP? Can LGDB do it to himself?

How long do these boosts last, what if multiple allies needs concept creation activated before he has stolen from enough enemies?

Like I said earlier, he can now grant the shields to allies, but I would drop the anti shield immunity, as that is just, being direct, a cheap way to make him great against Shan Yu.

You have a lot of stuff in this concept, perhaps you could move some of it down to friendships, and drop some stuff.

Now remember, this is all my opinion, I apologize if it offended you, you don’t need to follow my ideas, though I would appreciate it if you tried not to overstuff your concepts.

It’s ok! I’ll change it whenever I can!

If there’s anything else I should change let me know!

You know considering past LGDB concepts I didn’t expect much from this. But this was really good! Good job

well, at least you like this one more than the other one lol

Hey everyone, this concept just got refreshed. Changed it here rather than making a separate topic because why not.

Here’s what I changed:

Hope you enjoy, especially you @LetsGetDangerousBro!

extends the duration of the enemy’s buffs by 3 seconds

Apologies for reviving this, but it’s been 1 year since I made this topic and man, have I improved since the first time I developed this concept.

I added correct variables, new picture, and the battle badge.