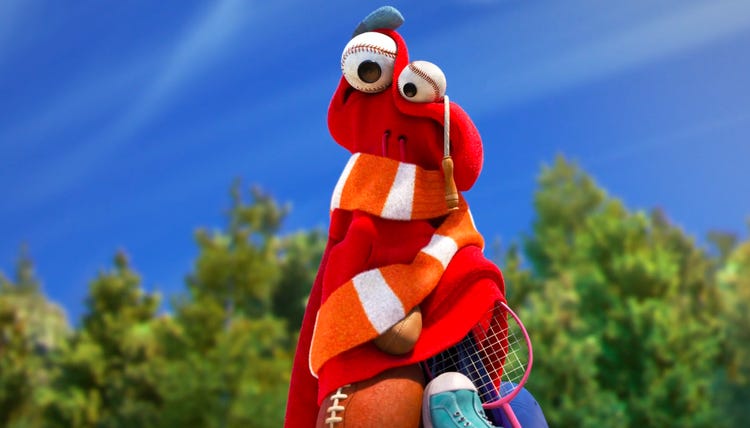 Position: Midline
Role: Control
Team: Red
Entrance: Lou gets out of his box

White Skill: Wrap It Up

The player picks an enemy for Lou to crawl to, which he then wraps himself around the enemy for 15 seconds, slowing their attack and movement speed by 90%, and stealing X health per second.
While on Auto, Lou targets the backmost enemy.

Lou spits marbles at all enemies, applying two stacks of “Marbles” to each enemy and dealing X damage.
“Marbles” increases the duration of debuffs by 10% per marbles up to a total of 80%

Once per battle, when Lou reaches 0 HP, he reconstructs himself and heals for X.
While being Reconstructed, Lou drops some Marbles, applying 3 stacks of Marbles to the nearest enemy.

Every two basic attacks, a secondary effect happens depending on what item he threw.
Baseball: The enemy is knocked back.

Jump Rope: The enemies movement speed is slowed by 50% for 7 seconds

Marbles: Applies two stacks of “Marbles” to the closest enemy

Lou gains X reality every time an enemy is slowed

For every three seconds an enemy is slowed, Lou’s allies gain 15% of Lou’s max health as a shield
+Reality
+Skill Power
+Health Stolen from “Wrap It Up”

Every 10 basic attacks, Lou throws all the objects in his basic attack at once. The number is decreased by 1 for every star.
+Armor
Allies: Basil, Finnick, Linguini & Remy

Nice concept should I make one for purl?

Thanks for submitting! I am amazed by the creativity and pure awesomeness of these concepts!