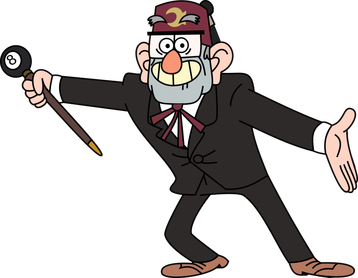 Entrance: a puff of smoke appears and then fades away to reveal stan with his 8-ball cane

Victory: Stan stands up his 8-ball cane, leans on it and flips his eyepatch to his other eye while giving a smile

Defeat: Stan fakes a heart attack and collapses to the floor

Basic attack: Stan throws a smoke bomb down on the ground in front of a nearby enemy, dealing X damage

Passive: each basic attack from stan now blinds the nearest enemy for 0.5 seconds.

Active: stan let’s go of a rope which releases hot air balloon shaped like grunkle stans face that flys above the enemy team, the balloon is so terrifying that it scares all enemies for 20 seconds then the balloon catches on fire and pieces of the balloon falls onto the enemy team, dealing X damage, X continuous damage for 10 seconds and decreasing the duration of each buff on an enemy by 100%.

Stan pulls out the world’s most distracting object and turns it on, stunning the two frontmost enemies for 8 seconds and stealing 25% energy from each stunned enemy.

If an enemy is blinded while this move is used, the stun duration is increased by 5 seconds.

Stan sets up a mirror right in front of the weakest ally and pretends to be in the mirror, this shields the ally for 20 seconds and gives them 35% of stans current energy at the moment. The mirror has X health and X shield health.

While the mirror is up, stan is completely invisible until the mirror dissapears and cannot be attacked by any source including enemies with precise.

When he is under 25% of his health, grunkle stan fakes a heart attack and collapses which scares all enemies for 10 seconds but then stan gets right back up and laughs at the enemy team, healing himself for X amount.

Red: fun in no refunds

Blinded enemies now have a 90% chance to attack and inflict any debuff they have in their skillset to themselves until the blind duration runs out.
+X skill power
+X damage to “Nightmare head”
+X armor

When Stanley pines activates “elderly powers”, all disables dealt by him now lasts 4 seconds longer for the first 10 seconds of the comeback.

All scares dealt to enemies decreases their evasion by 100% until the scare ends.

What type of damage?

scares all enemies for 20 seconds

This is way too long, especially if it’s to all enemies.

an enemy is blinded while this move is used, the stun duration is increased by 5 seconds.

Then, the scare will be useless since stunning disables the enemy, and I would lower the duration of the stun or remove it.

When Stanley pines activates “elderly powers”, all disables dealt by him now lasts 4 seconds longer for the first 10 seconds of the comeback.

Stat boosters and how is it upgraded per star?

All scares dealt to enemies decreases their evasion by 100% until the scare ends.