NB: I do not condone drinking, not only because I’m a minor but also because it ‎‎‎‎‎‎‎‎‎‎‎‎‎‎‎‎‎can be damaging to your health and the safety of others. Please note that all references to drinking are satirical in nature as they are one of Meredith’s defining attributes. If you take offense at this concept or are uncomfortable with the mention of drinking please send me a PM so I can make changes as required.‎‎‎‎‎‎‎‎‎‎‎‎‎‎‎‎‎‎‎‎‎‎‎‎ 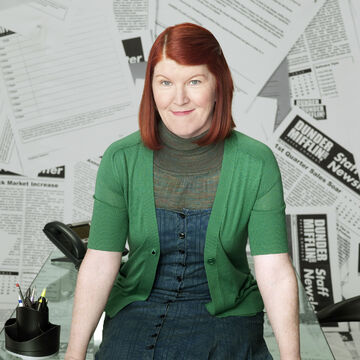 Meredith’s antics often get her into all sorts of trouble. The creeps better beware this irrational behaviour.

Basic Attack: Meredith hits the enemy with an empty bottle

Entrance: Walks in and winks

Defeat: Gets hit by Michael’s car

Fantastic Damage
Meredith lights her hair on fire and dances among the enemy team scaring them for 8 seconds and dealing X damage per second for 5 seconds.

Normal Damage
At the start of each wave Meredith drives her minivan through the enemy team dealing X damage and applying 1 stack of fatigue to all enemies.
Meredith heals for 30% of the damage dealt over the first 9 seconds of each wave.

Blue Skill: Drinking to Forget
Meredith takes a drink which heals her for X HP, increases her Max HP by X and cleansing herself of all debuffs.
The debuff cleanse has a chance to fail if it was applied by an enemy above level X.

Meredith and Elastigirl
Stronger against Tanks