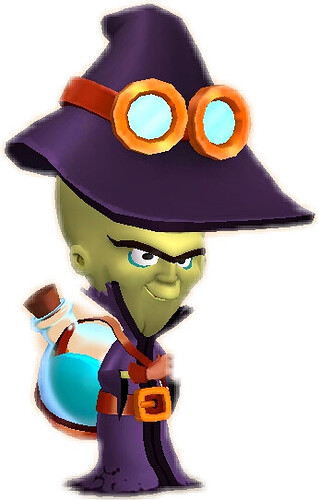 A man of science in a world of alchemy, this evil alchemist uses his knowledge to support his allies and hex enemies with his mad alchemy

Entrance: a large colorful explosion occurs which then clears up to reveal alchemist frankenbeans who is laughing maniacally

Victory: alchemist frankenbeans laughs while rubbing his palms together

Defeat: one of alchemist frankenbeans potions explodes which covers him in soot

Active: Frankenbeans adds a dangerous ingredient into a concoction and throws the dangerous concoction into the enemy team, dealing X damage to all enemies and decreasing their armor and basic damage by 20% and having a 50% chance to hex all enemies for 6 seconds.

If each target enemy has been hexed by any source, the enemy effected by “noxious” now has 20% more speed reduced off of them for as long as they are still here.

Alchemist Frankenbeans sprays his dreadful discovery onto his allies, healing all allies for X amount plus an extra X amount per each hexed enemies on the field and decreasing the remaining cooldown of his green skill by 100%

All hexes against enemies now decreases their max HP by 60%

Whenever a buff is duplicated on an enemy, that enemy’s duplicated buff gets flipped into a debuff, the enemy also gets hexed for 7 seconds.

All hexes towards enemies now decreases their fantastic crit by 50% until the hex wears off.
+X damage to “Enfeebling Elixir”
+X skill power
+X reality

Hexes against enemies lasts 1 second longer per each buff on the target enemy.

The decreased speed from “noxious” enemies is now increased by 15%.