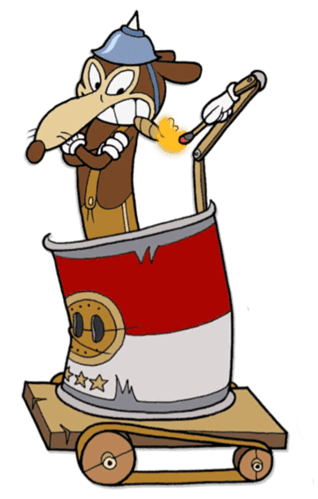 “Zis tank is ze ultimate veapon. You vill not vin!”

Entrance: werner rolls into battle in his tank and then he goes into the tanks interior and a cherry bomb cannon emerges from the tank

Victory: werner emerges from the tank and gives a salute at the camera

Victory(2nd phase): werner laughs like a maniac with both his arms raised

Defeat: werner attempts to uses a firework to blow up the enemies but it backfires and goes inside the tank before blowing the tank up with werner covered with soot while coughing (until B0)

Defeat(second phase): werner tries to get the tank to work but it malfunctions and stops leaving werner to scratch his head in confusion

Basic attack: the cherry cannon shoots out a cherry bomb at the farthest enemy, dealing x damage to that enemy

Basic attack(second phase): werner shoots a flame out of a built-in flamethrower, dealing x instant damage and dealing x damage overtime to any enemy hit by the flame.

Passive: werner is immune to a debuffs and disables while in his first phase

In werner’s first phase, werner points towards the enemies team and then drives the tank into the enemy lines, dealing x damage to each enemy hit and also dealing knockback to the frontmost enemies.

In his second phase, werner fakes out enemies by pretending that his tank has stopped working but then a giant purple cat paw appears and slams into the backline, dealing x damage to all enemies in the backline.

A catapult comes out of the can and hurls three projectiles at three random enemies, each projectile dealing x damage to any enemy that gets hit by them.

When werner health goes down to 0 the first time, the explosion from the firework that blows up his tank will deal x damage to all foes around the tank when it blows up.

After that, werner goes into phase 2 and attacks with what’s left of his homemade tank which also heals himself for full health.

In his first phase, werner gains x max health and x armor until he is defeated the first time.

“Scrap attack” now decreases Y% armor from each enemy hit by the projectiles.

Werner’s second phase now has increased attack power whenever he defeats a enemy with a shield.

Werner is immune to projectiles while he is in the first phase.