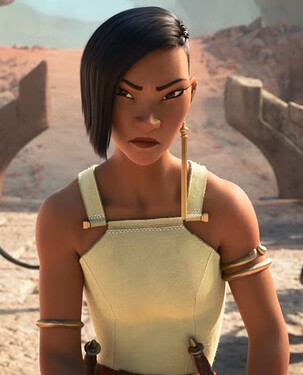 Heiress to the throne of the Fang tribe of Kumandra, Namaari loads her crossbow and sharpens her shortblades in preparation for taking down all who threaten the City.
Trial Team: Red
Role: Backline Control
Stars:

Green Skill - Blade Swing
Namaari jumps over to the strongest enemy and slashes at them with her shortblades, dealing X damage, stealing X energy, and stunning them for 6 seconds.

Blue Skill - Trust Shot
Namaari links with the weakest ally, granting them X HP and X Skill Power. She then takes aim at and shoots the enemy with the highest stats overall with her crossbow, dealing X damage and stealing X armor.

Purple Skill - Set in Stone
After performing her “Trust Shot” skill, a Druun passes by to turn her to a stone statue while also stunning enemies for 9 seconds. While she is a stone statue, all of her Skill Power is granted to the ally she linked with.

After they perform their White Skill, Namaari is reverted back into a human and may proceed to battle. This skill can only be performed once per wave.

Friendships:
Namaari + Raya
Campaign: Have a Heart - Raya and Namaari are no longer in Kumandra, so therefore the rules enforced there shouldn’t apply here. Here, they get along and fight beside each other against invasive creeps, and so far, their friendship has taken many unexpected, but still uplifting turns.
Disk: Total Trustworthiness
Disk Memory: Each time Namaari performs her “Trust Shot” skill, she grants 35% additional attack speed to the ally she links with, lasting for 10 seconds.
Disk Power: Z shield power
Allies: Calhoun, Mushu, Basil of Baker Street

Namaari + Mulan
Campaign: Battle of the Blades - The creeps have begun equipping themselves with sharp weapons, and only Mulan and Namaari, two of the City’s best blade-wielding women, can lead the cavalry to victory.
Disk: Fierce and Fearless
Disk Memory: Each time Namaari performs her “Cat Lady” skill, her serlot steals X HP from enemies, giving it to Namaari.
Disk Power: Z HP gain
Allies: Belle, Gonzo, Flynn Rider