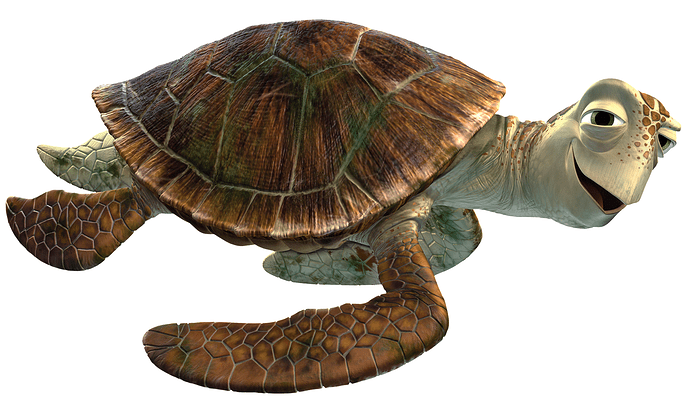 Entrance:a floating ocean current appears and crush rides in (until B0)

Victory:crush does a sideways spin and then smiles

Defeat:he retreats into his shell as it flips onto it’s back

Basic attack:a baby sea turtle swims into the enemies on its own current, dealing x damage and minor knockback

crush and a group of other sea turtles ride the current into enemies which deals x damage to the enemies and deals knockback to them as well.

crush dodges a attack with a trick and gains a shield which speeds up crush for 7 seconds.

Blue:the thrill of the ride

At the start of each wave, crush swims into enemies on a very strong current which deals x damage to the enemies and deals knockback.

“The thrill of the ride” now gives all allies a shield for 6 seconds.

all shields given to allies are now 2x more stronger and now speed up allies for every second that the shield is active.

crush/hank and dory
catch the waves
more armor when threatened

I liked this concept!
The only thing I’d change is the role. With all those shields and speed buffs, I feel like Support would be better. But nice concept otherwise.

In reality, sea turtles do not retract their body into their shell

How he could walk through battle field

he swims in a current in order to move around