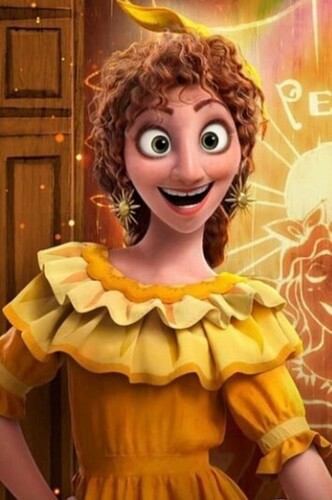 Pepa twirls her way to the battlefield, using her gift to help all of her allies.

“I know Mama but now I can’t find Antonio! What do you want from me.”

Entrance: Pepa enters the battlefield holding her dress up, swaying side to side. When she’s in her position she puts her dress down and gives off a polite smile.

Victory: Sunshine begins to gleam off her face as she twirls around with excitement.

Defeat: Grey and thundering clouds start to approach, she then sits down slowly and puts her hands on her face, alas the clouds cover her until she glitches out of battle.

Passive: Every second basic attack Pepa receives a grey and stormy cloud appears above her head. Every 5 seconds the clouds damage the enemy with the least HP for X damage. As more clouds appear the damage is increased by 3%. She can make 10 clouds appear maximum.

Active: Pepa breathes slowly and then smiles happily, slowly rowing her hand over her head. This creates a rainbow and “clears” the skies. Depending on many clouds she had above her head all allies heal X hp per cloud. The rainbow stays in the battlefield for the next 5 seconds, during this team all allies are immune to debuffs for the time the rainbow is still up.

Pepa clasps her hands together with a great smile, she speeds up all her allies by 180% and energizes all allies for the next 12 seconds. This cannot stacked. Energized allies gain X energy per basic attack.

If an ally kills an enemy while energized they gain 600 energy and heal X hp.

Multiple storm clouds erupt above enemies, dealing X damage. They apply “Struck” to all enemies for 8 seconds. The. the clouds leave the screen. If all of Pepa’s allies are above 50% up during this skill they all gain 350 energy.

“Struck” Enemies have a 80% to reflect a debuff back onto them. If they send out a debuff to an ally the debuff might not hit the ally but the enemy applying the debuff will be affected instead.

Struck has a chance to fail against enemies above level X

Whenever “Struck” takes effect all allies heal for X hp and have their skill power increased by X.

Red Skill: Not A Hurricane!

For the first 7 seconds of a wave enemies are not able to receive buffs.

During “Clear Skies” enemies are now sapped for 10 seconds, while Pepa’s skies are still clear she knows what the enemies have done to her current teammates resulting in a short rage.

All enemies lose X Skill Power and X Max hp whenever Pepa’s cloud attacks an enemy or Pepa makes a cloud appear, additionally her clouds damage is increased by X.

Pepa revives the first fallen ally, this can be her. The ally gains max hp on revival, 20% attack boost, a 200% attack speed boost, 15% defence boost all for 14 seconds.

Disk Power
+Z Energy gain for all allies and Pepa from all sources.
+X Tenacity

Which friendship would you use?

Hey y’all! I haven’t made a concept in a long time and i’m sorry, I just lost a general interest in DHBM :((( Hope you enjoy this concept for one of my favourite characters in Disney’s new move Encanto!

If anyone is reading this “late” or after the edits or if anyone decides to come back I was not proud of this concept so I had made a revamp of her blue skill, purple skill, red skill and her friendship with Calhoun and she is no longer a support, she’s now a control hero