Pharoah of the stars (unlikely concept) 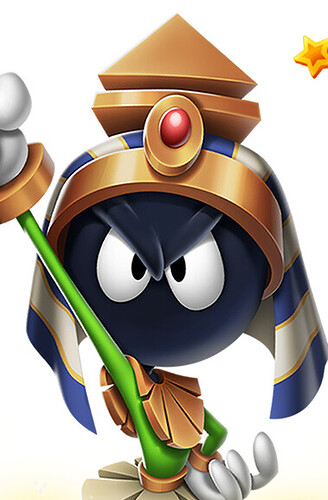 Entrance: Marvin’s throne appears then he teleports onto his throne and sits down on it

Victory: Star-Pharoah Marvin raises his crook into the air

Defeat: Star-Pharoah Marvin’s throne falls on top of Marvin as his crook ends up in front of the fallen throne

Basic attack: Star-Pharoah Marvin points his crook at the nearest enemy while a lazer from his throne zaps the enemy, dealing X damage

Passive: each basic attack and “divine denial” now steals 45% energy and up to 2 stacks of hardy from the target enemy and gives them to the weakest ally.

Active: Star-Pharoah Marvin sends a decree out and zaps all enemies with electricity, dealing X damage to all enemies with X extra damage dealt per the amount of health that each enemy has left.

Energy steal is less effective against enemies above LV Z

This skill also heals the ally with the most buffs for X amount.

When Marvin heals an ally for a third time, that ally becomes immune to disables for 10 seconds. When they would get hit by a disable, the ally instead blocks the disable and heal themselves for X amount and gain 2 random buffs.

If the ally has more than 3 buffs on them, they are granted 3 to 5 stacks of hardy.

Whenever an enemy gains more than 3 buffs, their buffs automatically ends no matter if they are protected or not and they are replaced with the debuff version of the buff with the same duration of the buffs that they once had.
+X damage to “God-kings decree”
+X skill power
+X armor

Buffs that are duplicated by other allies are now 100% more stronger.

Star-Pharoah Marvin now gains X skill power and X max HP for every 3rd buff he grants to an ally.

Shouldn’t it be “every 3 basic attacks”? Like, after his third basic attack this just stops working or am I missing something? Anyway, interesting concept! One more thing: what app do you use to make the pictures of the skills?