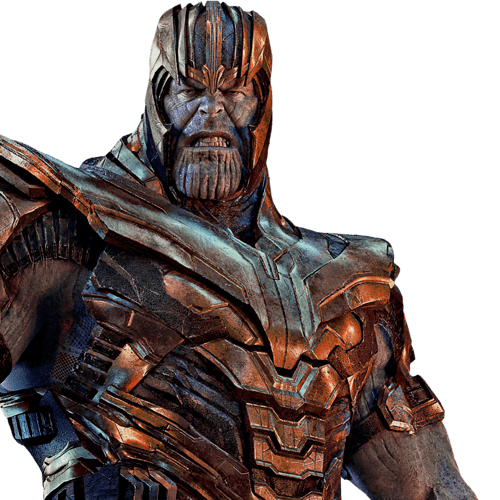 Quote: “I am inevitable.”

Entrance: Thanos teleports himself in his position, holding his sword.

Victory: Thanos sticks his sword to the ground and smiles.

White Skill: Snap!
✨Fantastic Damage
Thanos snaps his fingers, dealing X damage to all enemies, clearing them from all buffs and stunning them for 4.0 seconds.

The skill has a reduced effect against enemies above level X.

While in “Reverse”, the enemy will take twice the damage, and every second buff that applies to the enemy, will instead be applied to Thanos.

IMG_20200928_195155850×850 902 KB
Blue Skill: Power Of The Titan
✨Fantastic Damage
Thanos uses the Power Stone to create a force field around himself, granting himself an X HP shield for 8.0 seconds. While Thanos shields himself, he increases his basic damage by X, his skill power by Y, his tenacity by 35 and all enemies that attack him will take instead X damage.

IMG_20200928_195227850×850 897 KB
Purple Skill: Space In-between
✊Normal Damage
Before an enemy crits to Thanos, instead of taking damage, Thanos becomes invisible for 5.0 seconds and counter attacks with a basic attack, dealing X damage, 50% extra damage, knocking the enemy back and stunning him for 7.0 seconds.

Whenever Thanos uses ‘Snap!’, he increases his reality by X.

Don’t forget to check some of my unlikely concepts.

I like how the skill icons are the infinity stones

I like how the skill icons are the infinity stones

It couldn’t be nothing less

Yo no hablo gibberish

What kind of damage does it deal

Other than that this is a nice concept

@Wicked_To_The_Core, I did the changes. Thx for noticing.

It looks cool. With the snap it should have a ability to randomly ko a character.