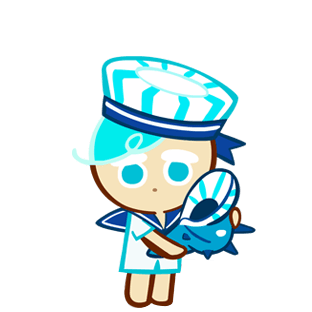 “Do you want to listen to the waves with me?”

Bound to the seashore, Peppermint deals great damage and supports the team with the help of his oceanic friends.

White Skill: Seashore Friends (Fantastic Damage)
Passive: Instead of dealing damage with his basic attack, Peppermint plays his shell ocarina, healing himself and ally with the least remaining HP for X HP.

Active: Peppermint blows his conch shell horn to call upon the Peppermint Whale which will swim through enemies, dealing X damage and knocking them back.

Green Skill: Paper Boat Sailor
Paper Boat Sailor, Peppermint Cookie’s pet, fights alongside him for the entirety of the wave. He has X HP and 50% of Peppermint’s armor and reality, and deals X damage with each subsequent attack.

Every 12 seconds, Paper Boat Sailor will produce Sea Bubbles for allies, healing them and Peppermint for X HP, granting them 400 energy, and 2 stacks of “Vitality”.

Each stack of “Vitality” blocks one hit from any sources and is then removed.

Blue Skill: Dolphin Call (Normal Damage)
Peppermint also calls in Dolphins while using “Seashore Friends” which will also deal X damage to the two strongest enemies as well as stunning them for 6 seconds. The Dolphins also leave behind Peppermint jellies which be given to Peppermint and allies, granting them X skill power and 75 tenacity.

Purple Skill: Calming Waters
Peppermint and Allies are immune to debuffs and Damage Over Time effects that last more than 6 seconds from affecting them.

If an ally is healed for more than 20% of their Max HP in a single heal, their tenacity and evasion are increased by 100 and they become invincible for 5 seconds.

Fantastic damage reduction and Invincibility has a chance to fail on allies above level X.