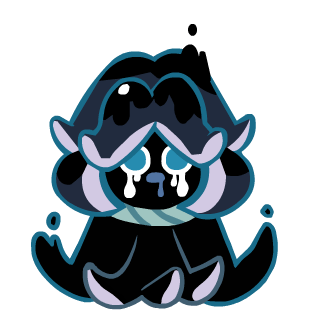 Despite having no memory and looks adorable than they sound, Squid Ink Cookie is a definite fear for the enemies. They can grow in size to deliver great pain on the opposing team.

Role: Control
Position: Middle
Trial Team: Red
Entrance: Crawls from the ocean
Victory: Finds a coin on the ground and starts to comfort eat
Defeat: Cowards a bit and tears up
Attack: Sneezes ink bubbles which fly over to the targeted enemy

White Skill: Hungry Sea Monster (Normal Damage)
Squid Ink Cookie transforms into a giant squid and slams their tentacles on the enemies, dealing X damage to them. If enemies are blinded they take an extra X damage.

Green Skill: Treasure Hunter
Squid Ink Cookie eats a gold coin, healing X HP and cleansing them of all debuffs. While eating the coin they get ink all over nearby enemies, blinding them for 9 seconds. If enemies are already blinded their attack speed is slowed by 45%.

The blind and slow has a chance to fail against enemies above level X.

Blue Skill: Blackish Tears (Fantastic Damage)
Squid Ink Cookie begins to wail inky tears, dealing X damage to nearby enemies. If they are blinded they are knocked back and blind enemies for 9 seconds they come in contact with.

The blind chance is further reduced against enemies above level X.

Red Skill: Cute Destroyer
“Hungry Sea Monster” now removes X armor from enemies damaged. If they are blinded they also lose X reality. Squid Ink keeps 50% of the armor and reality removed for the remainder of the fight.

The attack speed has a chance to fail if the blinded enemy is above level X.