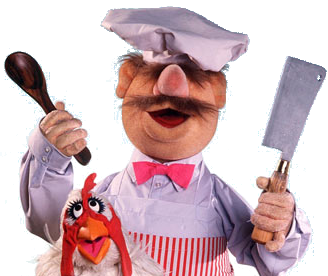 Appearance: Swedish chef will be fighting from behind his famous kitchen set counter with various cooking tools layed on it

Entrance: The Swedish chef appears behind a counter from his kitchen as he waves some utensils around before tossing them backwards

Victory: Swedish chef rubs his hands together while chuckling

Defeat: a bomb appears on the counter before then exploding as Swedish chef falls backwards in shock

Basic attack: Swedish chef hits a meatball with a tennis racket at the nearest enemy, dealing x damage to the target foe

Swedish chef bangs a pot on the counter which then three chickens spring out of the pot, each landing on a random enemy then bouncing onto the enemy right next to the target enemy. Each chicken deals X damage to the target enemy and other enemies as well.

Each chicken has a chance to stun each enemy they bounce off for 6 seconds.

A Japanese cake appears on the counter then Swedish chef crushes it with a cakenschmooscher resulting in pieces of the cake flying everywhere, dealing X damage to the enemy team and slowing them for 70% while it also heals his allies for X amount and shortens the duration of debuffs by 4 seconds.

Swedish chef attempts to split a banana with an axe but he gets distracted and sends a pot flying upwards which then lands on his head, this gives himself a shield for X amount while also preventing him from being damaged by attacks that deal damage above 70% of his max HP.

All disables done by Swedish chef now lowers 30% armor and attack power from the disabled enemy.

All slows and stuns done by Swedish chef or his allies now deals continuous damage to each enemy that gets effected by the disables.
+X damage to “Spring chickens”
+X skill power
+X max HP

“Japanese cake” removes the two oldest debuffs from each ally in his team.

“Spring chickens” now has 2 additional chickens fly out of the pot.

All slows and stuns done by Swedish chef or his allies now deals continuous damage to each enemy that gets effected by the disables.

Other than that, have a slice of cake