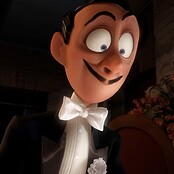 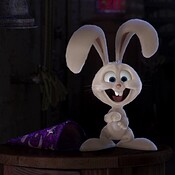 Quote: Presto and Alec do not speak in coherent words.

Animations:
Entrance: Presto enters the battlefield, reveals the inside of his hat, and pulls out Alec from inside it.
Victory: Presto and Alec take a final bow.
KO: Presto tries to reach into his hat again, but instead gets his fingers caught in a mousetrap.

Skills:
Basic Attack: Presto punches enemies through his magic hat, with Alec holding the wizard hat towards the enemy lineup.

White Skill - Pulley Peril - True Damage
Alec throws the wizard hat into the enemy crowd and jumps through Presto’s hat. He then Taunts them and jumps back into his hat before a piano crashes on top of the enemies he Taunted, dealing X damage and removing X armor.

Enemies that are Taunted will move closer to whichever hero does it.

Blue Skill - Electro Dance
At the same time a random enemy performs their White Skill, Presto puts his hand through his magic hat, getting himself shocked by a power box and making himself dance. While getting shocked, Presto and Alec have a 60% higher likelihood of dodging enemy attacks.

This skill will only last for 9 seconds, and the same enemy cannot be selected at random consecutively.

Red Skill - Thunderous Applause
Presto and Alec gain XHP for every 1 second they are shocked by their “Electro Dance” skill.