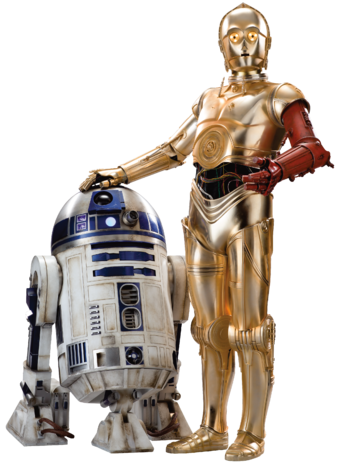 “Excuse me sir, but that R2-D2 is in prime condition, a real bargain”

C3P0 and R2-D2 uses their technology and teamwork to defeat the odds.

Entrance: C3P0 and R2-D2 both enter together.

Victory: C3P0 breathes a sigh of relief as R2-D2 rolls around him.

Defeat: C3P0 puts one of his hands over his eyes and shakes his head as R2-D2 powers down.

R2-D2 releases a oil slick which slows enemies movements by 50% for 7 seconds, then R2-D2 sets the oil slick on fire which deals x instant damage and deals x damage overtime for 7 seconds.

When under 30% of their max health, C3P0 calculates the odds of their teams success which decreases the effectiveness of debuffs by 50% to all allies and increases the chance of dodging critical hits.

“Scanning the situation” now makes the duo “precise” for 12 seconds which also increases their skill power when they are “precise” as well.

C3P0 and R2D2 are now immune to disables dealt by invisible enemies when the duo are “precise”.

C3P0 and R2D2/Kida
Protect the empress
less armor when invisible

Enemies who are invisible now have their armor decreased when they scanned by R2-D2 during “Scanning the situation”.

Allies now take 20% less damage from enemies when they are debuffed per star.