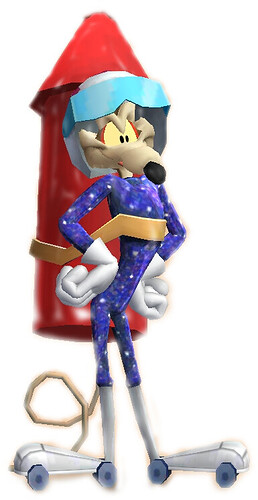 Get ready to fire! Rocket coyote uses rockets and fireworks for risky damage dealing in a abundance of colorful explosions!

Entrance: The rocket car crash lands onto the battlefield as rocket coyote jumps out of the car and lights the firework on his back.

Victory: Rocket coyote puts his hands on his hips and smiles as fireworks explode above him

Defeat: Rocket coyote tries to use “fire in the hole” but it instead pushes him off-screen which is then followed by an explosion which is also off-screen

Blue: Fire in the hole

“Fire in the hole” now decreases the attack speed of the backmost enemy by 70% for 5 seconds if the enemy has already been sapped.

“Big boom” slows all enemies movement and attack speeds by 45% for 3 seconds.