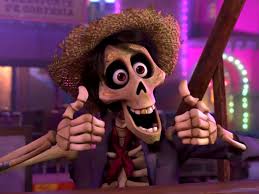 “That was a lie, I apologize for that.”

A mischievous trickster and a talented songwriter, hèctor uses trickery and skele-dancing to help his allies

Entrance: Hèctor dances into the battlefield before he then flashes a smile and stances for the performance (Until B0)

Victory: Hèctor gives two thumbs up to his allies

Defeat: Hèctor falls to the ground while in pain

Basic attack: Hèctor twists his body around and throws his de-attached arm at the nearest enemy, dealing X damage

Hèctor does his dance from the un poco loco scene until his energy runs out, duplicating every buff that is given to allies and increasing the movement speed of each ally by 5% per each second.

At the start of each wave, hèctor disguises himself as frida kahlo for the first 6 seconds, healing all allies by X amount per each second and making all allies immune to negative effects until the disguise wears off.

This also charms the nearest enemy for 6 seconds.

Red: Love for each other

Enemies with distract inflicted onto them now have 15% movement speed drained from them until the distract wears off.

Allies become invincible for 5 seconds when they are healed while at full health.

What about friends with Miguel

I don’t think so because Miguel have 4 Friends with another characters (Alice, S&N, Belle and Angel)

I mean, I doubt people are paying that much attention to that for what is just a concept (I’m not, anyways

Even so, though, @I_am_Chill_Dude, just because Hector and Miguel come from the same movie doesn’t mean that @C-train has to give them a friendship together if they don’t want to.

Maybe he won’t be friends with Miguel

OK, I get it now. Maybe he could be friends with Jack Skellington and the or the other musicians.