Today’s concept is based off looney tunes: world of mayham 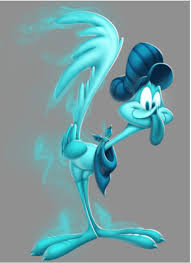 Entrance: A ghostly train rides into his position then it dissapears to reveal revenant road runner

Victory: Revenant Road Runner looks at the screen with a sinister look

Defeat: Revenant Road Runner flinches before he then dissapears like a ghost

Revenant Road Runner tugs a rope then a giant ghostly train whistle appears behind the enemy team and blows itself, scaring and silencing all enemies for 10 seconds.

Purple: Off the rails

All scares done by Revenant Road Runner or his allies now lasts 2 seconds longer per each buff on them.

“Rattling passage” decreases the skill level of each enemies blue skills by 15.

Why is it terrible?

I thought it was really good.

But why do you hate it?

I have that character!
Maybe you should do a Big Chungus concept soon.