Can we focus more on the dying areas of the game please? The main 2 for me are:

Participation is dropping by the minute for most guilds. Create a participation clause in so no attacks = no rewards like it is in surge

Or, make it actually enjoyable instead of forcing people to play it.

And MMR matchmaking needs adjustments as well… for some reason my guild (which is the 6th most powerful guild in my server) has been on a losing streak since mid-October. Recently we have been paired up with the top 5 most powerful guilds in a row, and each have more than half of our total power

And the matchmaking only pairs us up with guilds we haven’t fought during the past 7 wars. Usually 5/7 of those wars are lost. The matchmaking should only let us fight the same guild once per season.

the same thing has happened in my guild since mid-October. we are often paired with guilds too stronger than us in impossible-to-win wars. and now in the same month we find ourselves fighting for the second time against the most powerful guild on our server. p.s. can you fight twice in the same month with the same guild? can it affect the fact that he changed his name?

The game is currently programmed to prevent guilds from facing each other more than once every seven matches. So if your guild is ranked somewhere above 10th or 12th, you’re pretty much guaranteed to face multiple top 5 guilds more than once a month.

p.s. can you fight twice in the same month with the same guild?

I love the new roadmap! It opens a door that many players have been wanting for awhile now…to know what all is being focused on. Thank you!

So yes, like I already said, matchmaking is terrible for rank 6-12

Reading some of comments I must say that I agree with all the comments on War. It definitely needs a big adjustment.

Another thing I would make lots of people happy to see is more ways to be able to run Guild Management. What I mean by that is things like being able see members participation history in Surge and Invasion, you can go back a couple months in War history but there isn’t anything like that for Surge or Invasion outside of the current one. Once a new day of Surge starts, the previous day’s record of everyone’s numbers is gone and when a new Invasion starts you also lose the list of the previous weeks points. It would help to be able to determine just who all is consistent in their participation. To do this now you have to keep a record of it ourselves and it gets very tedious. Things like seeing a record of how many hits someone made on a guild bot(s) Invasion, the highest level everyone’s personal bot reached every Invasion, how many times did someone hit a bot that wasn’t their personal one or a guild one. Heck being able to sort out everyone’s stats by team color would be way awesome!! Lol As far as Surge goes, the current list and how it’s set up is fine I just wish there was a way to look up previous day’s.

It would also be nice to have a better way of seeing everyone’s participation in War, a way to see all in one area what a members attack history is so you don’t have to go through each individual war and figure it out. Having a way to see when someone last updated their War defense would be extremely helpful too. My guild currently has a big problem with un-updated defense lines. We have a few members who are active and participate, their one flaw is that their War Defense is severely underpowered because they haven’t updated it in so long. Our worst offender has lines that total under 500k between all 3, but they make attacks with lines where at least 2/3 are over 1M. He is one of our mid power members but because of this I leave his lines out of our Defense completely. Several of us have messaged and messaged and messaged for months!!! No response and no changes made. So it would also be awesome to have a way to flag someone’s defense so that they get a notice or something that they need to be updated.

There are several other things I’ve thought would make running a guild easier, but these are the ones I can think of off the top of my head. Lol

Love the insight; thanks for sharing!

Thank you for working on the story content from Friendships!! There was some real quality and I look forward to laughing again with some of the spot-on characterizations! (Anything Zurg!)

Yay more guild contest perks! That last round of new perks was sweet! Added extra dimensions to everyone’s gameplay and gave us guild goals that was fun collab.

Q: The quick fight all breakers; would that be a successional queue where I start on left and work right through the breakers?
I am really worried that 3/4 would be beatable but 1 gives you a hiccup where you need to swap out just one char and you lose all 30 (4x7)stamina? Or is it like Surge where doesn’t matter as long as total power is greater than threshold?

For the next scrum:
Please look at Mission tweaks:
-Ugh staring at 132/135 memories aggravates me everytime cuz it makes me realize how frustrating 136/135 will be: not the feeling of accomplishment I want for a maxxed disk!! please let us do something with our extra memories?
-Speedups are useless because they are so in efficient. 32 hours for a power up- how many speed-ups did I get in this contest? Not even comparable.
-once you have completed a Campaign it will still generate a timer on existing Power-up missions where when you max a disk it automatically removes from list.

Can it be easier to level up heroes. And what I mean by that is it takes to much hero xp to reach the next level. The more you level up the higher the amount of xp is required. I’m currently at level 111 and it takes 15,000XP to reach the next level. I usually wait for the mega mart to open but still takes to much time. Please put a cap to amount of xp is required!

Already wondered about that huge difference between the numbers…

Any way for us to tell when Roadmap is updated, Polaris? Or you will tell us everytime it is?

There’s a “Last Updated” note in the About section: 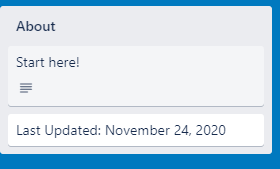 It will probably be updated every 2 weeks. I’m not planning to announce every time I move something, but if I add new things or make big changes (like thing A has been delayed because Z) I’ll post in the announcement thread.

Good to know more things are in testing

Good to know more things are in testing

The columns are set up to reflect our regular development process: design > development > testing > release

Something’s been changed on the roadmap. Late-Game crates are being moved to 2.7. 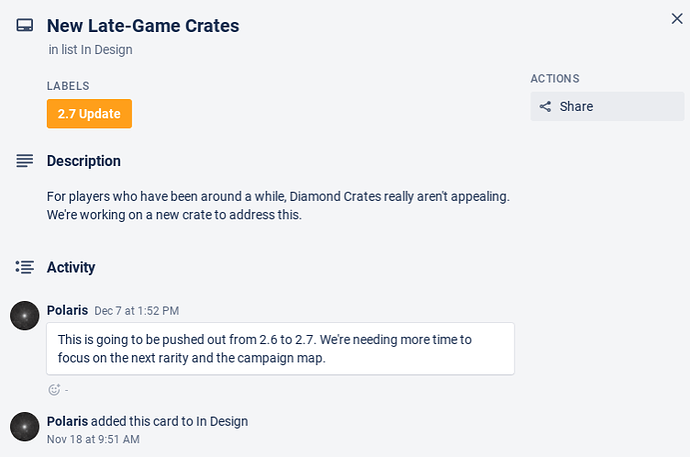 Judging from this we may be getting an R17…