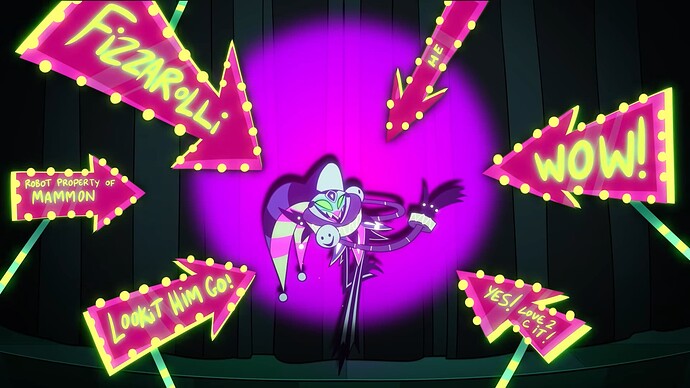 This clown ain’t clowning around! Fizzarolli will put on a show for his teammates while keeping the bad guys busy!

Passive: Fizzarolli dodges an attack every 5 seconds and gives a random ally 1 stack of “Cheer”. Cheer buffs Fizzarolli’s attack speed by 5% for every stack across all allies. If an ally with stacks of Cheer is knocked out, those stacks will be gone. The Cheer buffs cap at 100%. He cannot give Cheer to himself.

Active: Fizzarolli jumps into the air and flips several times, giving 4 stacks of cheer across all allies, and then cartwheels into the enemy team, knocking them back, and dealing X normal damage to all of them.

Fizzarolli dances and sings, buffing him and his allies’ skill power by X, and gives them 1 stack of Cheer each.

When Fizzarolli has given 10 stacks of Cheer, he will start spinning like a tornado for 7 seconds, giving himself Reflect for that duration. He also becomes immune to TRUE damage in this state. TRUE damage immunity has a chance to fail from enemies above level X.

Purple Skill: Every Boy, Every Girl

Is charged in battle when: Fizzarolli dodges two times.

Victory: A group of imp kids gather around him, as he hugs them all, and gives the viewer a smug grin.
Defeat: Lights on green fire, as he twitches and malfunctions, while his face plate burns off.
Entrance: Does a sideflip in the air, and lands, presenting himself while chuckling.
Basic Attack: Lunges an arm forward.

Friendship Campaign: Collaboration Act
Description: Robo Fizz invites himself to The Muppet Show, and gets to know the cast. Kermit takes the offer to let him on, but consequences may soon come.
Heroes: Animal, Lilo, Kronk

+X Normal Crit per Control Hero
When Fizzarolli dodges an enemy, their Tenacity drops to 0 for 3 seconds. (+1 per star)

Friendship Campaign: Do Not Touch The Clown
Description: Joy tries to make Fear face his…fears by making him get along Fizzaroli, who plays around with that fear, and Fear has to try and get over it.
Heroes: Sadness, Gadget, Hades

Disk: Jokes For You (Speedy Dodge)
Appearance: A laughing mask on a stick.

[HELLUVA_BOSS_-Loo_Loo_Land_S1_Episode_2-YouTube-_Google_Chrome_13_12_2020_2_23_14_PM] Kermit [Kermitphone] Intro Kermit: Well, hi ho, fellow performer! What brings you to the Muppet Show? Robo Fizz: I couldn’t help but notice your ratings are through the roof! What do you say we collaborate? Robo Fizz: The Muppet Show AND Loo Loo Land! It’d be a blast, AND it’d pay well! Kermit: Well, I suppose it wouldn’t hurt to rub shoulders with another set of performers, so…I’ll accept your offer…

I love the series he’s from, but since it’s extremely inappropriate, could you please not post anything about it, concepts or otherwise? There are 10 year olds occasionally roaming around the forum. Sorry for the trouble.

I mean, there are kinda a few Mortal Kombat concepts floating around here, so it’s kinda nothing new. But I just wanna find out if I HAVE to remove this. ".3.

You don’t have to, but it’d probably be for the better if you did.

Maybe you should add this: Warning! Before reading the concept, please note that the characters is from a cartoon that is not made for kids. Read at your own risks.

Why are you talking off topic?

How do you fully leave the forums

You can’t delete your account, but if you click on your avatar icon in the top right, then hit the