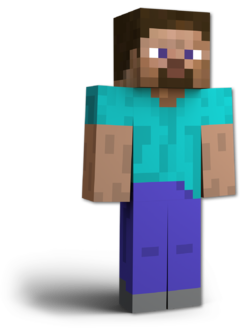 Steve crafts whatever he needs to fight with in order to face the monsters of this world may it be armor, swords or even TNT.

Entrance: a hole is dug from the floor and the digger turns out to be steve who jumps out of the hole and covers it with a piece of the same floor.

Defeat: Steve turns red and falls over before disappearing in a puff of smoke

Passive: For the first 5.5 seconds of each wave, Steve starts in the backlines and mines the ground in front of him until he collects enough “materials” which allows him to gain some armor and a new sword from the material he collects then he moves towards the frontlines to fight.

Steve can collect 5 stacks of “materials” per each wave from his mining.

The armor and swords are as followed

Steve’s armor and attack power is increased by X amount per each armor and sword that steve crafts for himself.

Active: Steve places a TNT block in the middle of the enemy team then he creates a trail of Redstone and a pressure plate then he steps on the plate which makes the TNT block explode, dealing X damage to all enemies, decreasing the duration of all positive effects by 1 second per each buff on the ally team and inflicting 2 stacks of fatigue on each enemy.

Steve places blocks in front of himself, giving himself a shield for X amount per each stack of “materials” he has on him when he activates this move.

If Steve has more than 7 stacks of “materials” on him, he cleanses 2 to 4 negative effects off of him and heals himself for X amount.

Each shield lasts for 6 seconds.

Steve strikes the nearest enemy with his pickaxe, dealing X damage to the enemy, stunning the enemy for 4 seconds per each 5 stacks of “materials” on him and inflicting “Shattered” onto the enemy.

Shattered has a chance to fail on enemies above LV Z

Purple: Back in the mine

“Pickaxe swing” increases his normal crit by X amount whenever he hits a enemy with “Shattered” inflicted to them.

Steve instantly activates “Blocked” when he falls under 35% of his health.