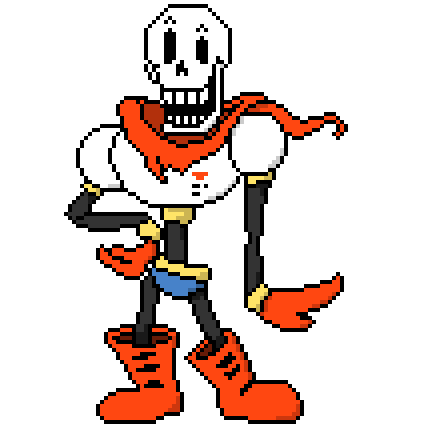 Entrance:he walks in and does a pose before getting into a battle stance

Victory:he raises one of his hands into the air and cackles

Defeat:his head falls off as his body falls to the ground

Papyrus summons three bones from the ground, dealing x damage to the farthest three foes hit and decreasing their attack power for 5 seconds

Papyrus smells some of his spaghetti which heals himself for x amount.

“Special attack” now inflicts “blue” onto the enemies hit.when the enemies are effected by “blue” their attacks deal 20% less damage to papyrus.

When papyrus falls under 30% health, he gains a shield for x amount and heals slowly for 10 seconds.

“Kiss the cook” now gives him a attack power boost of 35% when his health is full.