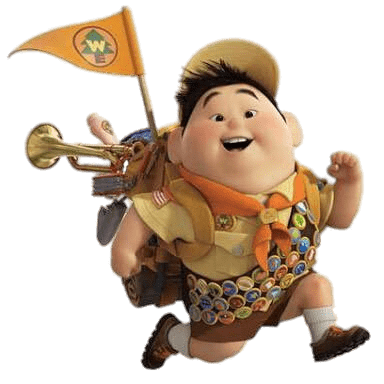 Entrance: Russell walks to his position while eating a chocolate bar.
Victory: Kevin runs to Russell and puts him in her back, then Russell hugs her.
Defeat: Russell throws his sash to the ground and gets a bit mad.

Quote: “Well, I gotta help you cross something."

Basic attack: Russell throws a random object from his bag

(normal damage)
Russell eats a bit of his chocolate bar healing himself for X HP, then throwing the rest of his chocolate to the farthest enemy stunning them for 5 seconds, then Kevin appears on the battlefield scaring enemies for 10 seconds and charging towards chocolate, dealing X damage while passing enemies and knocking them back.

(normal damage)
Russell tries to build a tent but fails, making some of the parts hitting the closest enemy dealing X damage to them, then the tent flies away to the farthest enemy and falls on them, dealing X damage and stunning them for 10 seconds.

‘‘Explorer Signals’’ heals X HP on three allies with lowest HP and grants them one stacks of hardy.

The silence has a chance to fail against enemies above level X.

Short story: Clawhauser decided to improve his skills as Policeman and Russell decided to help him by sharing his skills and knowledge he gained as Wilderness Explorer, unfortunately, they keep being interrupted by creeps or gets distracted by beautiful weather or invites to games by other kids, by the end of day Russell failed teaching anything Clawhauser but they spend together a nice day in the City.

Short story: Russell gets invited by Huey, Dewey, and Louie for a campaign in woods during the night, they packed all required items and starting building their campaign, not realising they build it near a spawning place of the creeps, they get attacked by creeps, together they fight against creeps using their smart. After a long night of fighting, they eliminated all creeps, but their campaign gets destroyed, a short time later Scrooge and Carl come to pick them up from the wood and invite for an adventure! Boys ran away from them screaming as they had enough adrenaline for a long time.

But the image isn’t showing…

Image should be fixed…
Now EXPLORE… the concept.

I still don’t see it. I refreshed it.

I can’t see the image

Same Can not see it

I can see the image. 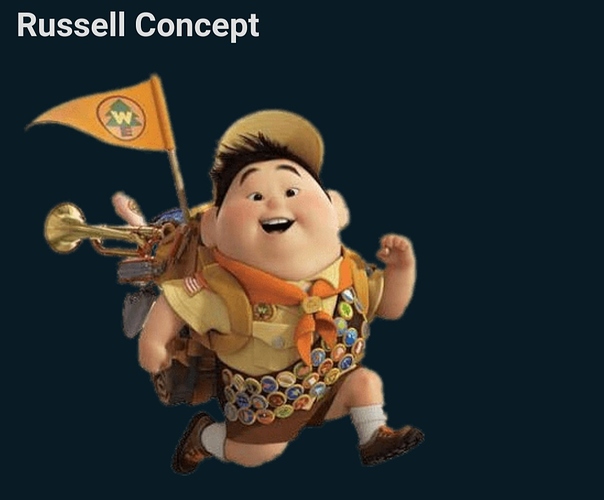 I csn see the picture too

Pretty decent concept. I’ll give you that.

I hate to sound rude, but maybe give reasons why?

Skills are very good. And Russel cracks me up sometimes.